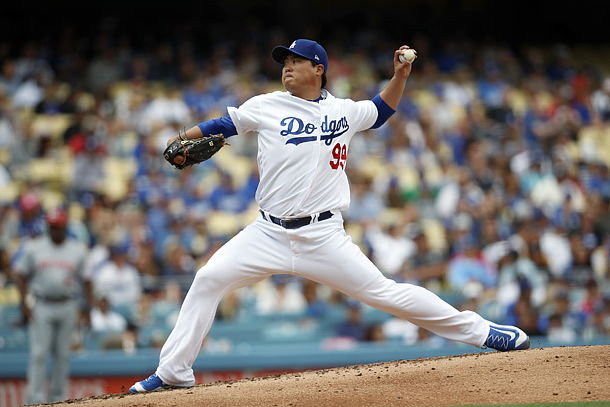 Ryu Hyun-jin of the Los Angeles Dodgers throws during the game against the Cincinnati Reds at the Dodgers Stadium on Sunday. [AP/YONHAP]

Hurt by long balls yet again, Ryu Hyun-jin of the Los Angeles Dodgers has barely avoided a loss in a shaky start.

Ryu gave up three home runs against the Cincinnati Reds at Dodger Stadium in Los Angeles on Sunday (local time). Ryu was lifted for pinch hitter Franklin Gutierrez in the bottom fourth with the Dodgers trailing 4-2.

The Dodgers’ offense came alive after Ryu left the game and rallied for a 9-7 victory thanks to a six-run eighth.

The four innings matched Ryu’s shortest start of the season. He remained at 2-6 and has a 4.42 ERA after four earned runs in those four innings on six hits. He struck out five and walked none, while making 68 pitches, 49 of them for strikes.

This marked the second start of the season in which Ryu was tagged for three home runs.

Ryu’s status as a full-time starter appears to be day-to-day. He has made one relief appearance as manager Dave Roberts continues to perform a juggling act with his crowded rotation.

The Korean southpaw had an encouraging start last week in a loss to the Washington Nationals, when he threw seven innings and made 102 pitches, both season highs.

Ryu lamented that he allowed a lot of long drives, but claimed he has no problem in his health.

“I had a bad game again,” Ryu said. “My pitching speed wasn’t as fast as before. Besides giving up long drives, I think other things were alright.”

Against the Reds, Ryu retired the side in order in the first but found trouble in the second, when the first four Reds batters hit safely.

Adam Duvall led off that inning with a home run to left center to give the Reds a 1-0 lead. Eugenio Suarez followed that up with a single, and then Scott Schebler blasted a two-run shot to put the Reds ahead 3-0.

Jose Peraza singled to center, but Ryu prevented further damage by striking out two of the next three batters.

Ryu then allowed his third home run of the game in the third, as Joey Votto touched him for a solo homer with one out in the third.

Ryu worked around a Peraza single to strike out the side in the fourth, and it turned out to be his final inning of work.

“It was the coaching staff’s decision, and you can’t do anything about it,” Ryu said of his exit. “Of course, I could have thrown more pitches in that situation.”

Ryu has now given up 12 home runs in 57 innings. He allowed only eight home runs in 152 innings in 2014, his last full season before undergoing shoulder and elbow operations the past two years. In his rookie season in 2013, Ryu let 15 balls leave yard in 192 innings.

“In daytime games, balls tend to go deeper, so I should have pitched with that in mind,” he said. “But I think opposing batters did well when they hit long balls off my first pitches.”

The Dodgers cut it to 4-3 on Chase Utley’s solo home run in the fifth, but the Reds pulled away with three runs in the top sixth, thanks to Peraza’s sacrifice fly and Devin Mesoraco’s two-run blast.

But the Dodgers erased the deficit in a hurry in the eighth. Cody Bellinger got the ball rolling with a solo home run, and Utley drew a bases-loaded walk to get the Dodgers to within 7-5.

Corey Seager then launched a grand slam off Raisel Iglesias to put the Dodgers up 9-7. Closer Kenley Jansen slammed the door shut on the Reds in the top ninth for the save.

Prior to this game, the Dodgers had scored 2.38 runs per nine innings on average in Ryu’s appearances. That’s the second lowest total among all major league pitchers with a minimum 50 innings pitched.