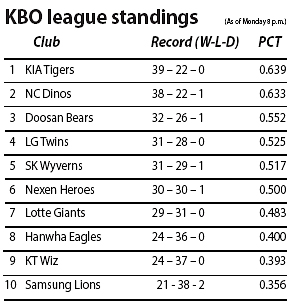 The LG Twins became the fourth team in the Korea Baseball Organization’s history to have all its batters score a run, a hit and an RBI during its game against the SK Wyverns at Jamsil Baseball Stadium on Sunday - giving the Twins a big 19-1 win over the Wyverns.

The Twins may be the fourth team in KBO history to achieve this record, but they did it in a record number of innings, managing the feat in only three. Though the Twins did not have any home runs throughout the game, they continuously had hits, scoring seven runs in the second and third innings. The victory also allowed the Twins to move up to fourth in the KBO standing.

And the Twins’ starting pitcher, Henry Sosa, earned his sixth win of the season, only allowing one run throughout the six innings. It was an interesting match-up between the two teams as the Twins are ranked at the bottom by number of home runs, hitting a total of 30 so far in the 2017 season, while the Wyverns are the leaders in the category, with 104.

Meanwhile, at Daejeon Hanbat Baseball Stadium, the Samsung Lions, the bottom ranked team in the KBO, defeated the Hanwha Eagles 7-4 to win two of the three games over the weekend.

Lee Seung-yuop hit his tenth home run of the season on Sunday to continue his two-digit home runs for his 13th consecutive KBO season.

And with the Lotte Giants’s 7-4 victory over the Doosan Bears on Sunday at Ulsan Munsu Baseball Stadium, the Giants won the weekend series against the Bears. 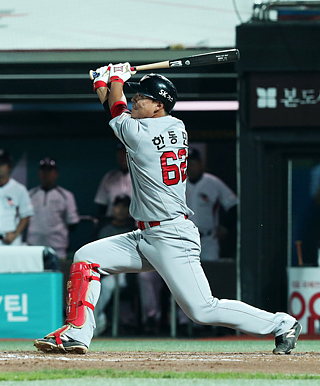 For the first time since Han’s professional debut in 2012, he hit 20 home runs in a season during the Wyverns’ game against the LG Twins. Han has now extended his lead in the KBO’s number of home runs with Choi Jeong of the Wyverns, Han’s teammate.

It was quite a disappointing game for the Wyverns on Sunday, as Han’s home run in the first against Henry Sosa, the Twins’ starting pitcher, was the only run they scored throughout the game.

Han had a great college career at Kyungsung University, where he was named Korea Baseball Softball Association’s (KBA) best collegiate hitter during his junior year in 2010. Han thus got to play for the Korean national baseball team at the 2011 Baseball World Cup in Panama.

But he failed to follow this up in his senior year, which led him to get drafted 85th, in the ninth round of the 2012 rookie draft, as the Wyverns’ outfielder. Since his first year with the Wyverns, Han’s batting average stayed consistent in the 0.200s, but looking at the number of home runs, it is showing great achievement when compared to last year at zero.

Though Han is not done with the season yet, as far as the number of home runs, he is having his best season, since the most number of home runs Han hit in the previous year was 14 during the 2013 season. Aside from his personal accomplishment, Han became the first batter in Wyverns history to hit 20 home runs in a single season.

After the three-game weekend series against the Twins, Han’s batting average is now at 0.299 with 49 RBIs.

Starting today, the Wyverns will be playing in a three-game series against the Hanwha Eagles.