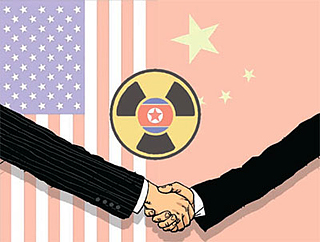 I visited Harvard Kennedy School at the end of May and met with Professor Graham Allison, who was my teacher during my study abroad. He is a renowned scholar of international politics and an author of the book, “Essence of Decision: Explaining the Cuban Missile Crisis.” Based on his five years of study, he wrote a new book, “Destined for War: Can America and China Escape Thucydides’ Trap?,” and expressed concern about the North Korean nuclear crisis and South Korea, sandwiched as it is between the United States and China.

In order to avoid Thucydides’ Trap, the leaders of the two countries must implement wise statecraft. Thucydides is an ancient historian who wrote the History of the Peloponnesian War that ended the golden age of Greek civilization. He argued that a war was unavoidable due to the challenge by Athens, a rising power, and the fear of Sparta, a ruling power. And that same dynamic is now at play between the United States and China, Allison said.

Secretary of Defense James Mattis, who has in-depth knowledge of wars in both the East and the West, also mentioned the Thucydides’ Trap during his confirmation hearing. Steve Bannon, Trump’s chief strategist, was also deeply intrigued by Thucydides’ “History of the Peloponnesian War,” and he once used “Sparta” as his computer password. Bannon predicts that the United States and China will have a war in the South China Sea in the next five to 10 years.

A collision or a compromise in U.S.-China relations will have a direct impact on the Korean Peninsula, located on the geopolitical fault line of Northeast Asia and where a war, in which the United States and China fought against each other, has not ended.

In early April, leaders of the United States and China met in Florida and discussed the security issues of the peninsula. According to Allison, Xi proposed to Trump that the United States freeze military actions on the peninsula if the Kim Jong-un regime stops its long-range missile tests. It means a big deal, based on the strategic conveniences of Washington and Beijing, to stop the North’s additional provocations, which threaten the U.S. mainland with nuclear missiles — rather than punishing the North for its past nuclear development. If the deal is reached, the North will become a de facto nuclear state and the Korea-U.S. alliance will be weakened.

In an opposite scenario, the North will develop inter-continental ballistic missiles armed with nuclear warheads to hit the U.S. mainland while China, under U.S. pressure, is hesitating, and the United States will launch a preemptive attack on the North. Although the possibility is small, that will immediately trigger the North’s retaliation and a second Korean War will take place that will lead to another head-to-head collision between the United States and China. In this case, the victims will be the two Koreas.

From our perspective, the most important task is creating a realistic resolution to avoid a premature compromise between Washington and Beijing for their strategic convenience, or a dangerous conflict, and to deter the North’s nuclear and missile developments. Allison said the North won’t give up trying to obtain nuclear weapons any more than Israel or the United States would give up theirs.

The Korean defense ministry said the North has about 50 kilograms (110 pounds) of weapons-grade plutonium, enough to build 10 nuclear bombs. The Institute for Science and International Security of the United States estimated that the North had 13 to 30 nuclear bombs by the end of 2016 and it will make three to five additional bombs every year to total 50 by 2020.

Time, therefore, is not on our side. A complete, verifiable and irreversible dismantlement is the only solution, but the first step is the North’s termination of its nuclear and missile program. A complete nuclear dismantlement of the North will be a long, difficult and step-by-step negotiation.

The Moon Jae-in administration took the first step of communicating with its ally during with the phone call between Moon and Trump and dispatch of Moon’s envoy to Washington. Top security officials of the two countries also met. In the upcoming Korea-U.S. summit, the two countries’ alliance must be restored, a common strategy to resolve the North’s nuclear program must be created and the two countries’ roles must be effectively divided.

The Trump administration will likely put maximum pressure on the North by reinforcing sanctions, rather than attempting to change the North’s regime, and start the intervention when the North stops additional provocations. The Moon administration must grasp the latest update in U.S.-China relations and Trump’s style of diplomatic dealing.

South Korea must improve its role as an initiator to create an actual breakthrough in denuclerization of the North while keeping U.S.-China relations from falling into the Thucydides’ trap. The trust between Seoul and Washington is facing a critical juncture, with Moon’s order for an environmental inspection making the fate of the Thaad deployment uncertain. If the alliance is shaken, the North Korean nuclear crisis will be worsened and the Korean Peninsula might very well become an arena of competition for superpowers.

*The author, a former lawmaker, is the chairman of the Korean-American Association.