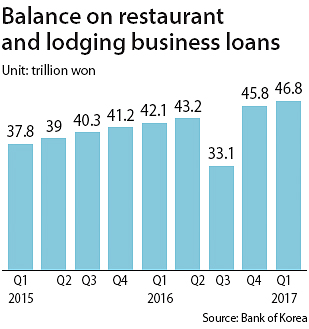 The amount of debt held by small neighborhood restaurants and boarding houses increased in the first quarter, according to a central bank report released Monday, raising concerns about their survival as business at these establishments has been falling at a fast rate.

The report was especially alarming because the Bank of Korea’s governor, Lee Ju-yeol, hinted on Monday at the possibility of raising interest rates this year, which would put businesses in further debt.

According to the Bank of Korea’s report, as of the end of March this year, the balance on loans borrowed from restaurants and boarding houses amounted to 46.8 trillion won ($41.7 billion), about 2.2 percent higher than at the end of last year.

While owners of restaurants and lodging are taking on more debt, their businesses continue to struggle. In the first quarter this year, business at restaurants and lodging declined 1.6 percent, faster than the previous quarter’s 1.4 percent decrease. It was an even sharper drop from the 0.3 percent decline reported in the first quarter last year, and the sharpest since the second quarter of 2015, when Korea was impacted by the outbreak of Middle East respiratory syndrome and suffered a 1.9 percent drop.

The business struggles are largely believed to be the result of a slow recovery in consumption as well as a significant drop in Chinese tourism due to ongoing diplomatic tensions over deployment of a U.S. missile defense system on Korean soil.

The rising risk taken on by these industries is alarming because many of the loans come with high interest rates. Loans taken out from commercial banks, which typically offer lower rates, still make up a majority of loans borrowed by restaurant and lodging owners, but an increasing number of people are also turning to nonbanking financial institutions that offer higher rates. Borrowing from these types of institutions is growing at a rapid pace, especially since the government mandated commercial banks to adopt stricter loan evaluation standards in hopes of curbing the rise in debt.

In the first quarter of this year, borrowing from nonbanking financial companies, including savings banks and cooperatives, amounted to 12.5 trillion won, up 5.6 percent increase compared to the end of last year. During the same three months, fresh loans that were borrowed for the purpose of opening a business increased by 357.4 billion won, which is about half of fresh loans borrowed from nonbanking financial companies.

The heavy debt burden at small restaurants and boarding houses is also concerning because many of the businesses are run by retirees who have little to fall back on if they fail.

And government statistics show the establishments are not doing well. As of 2015, among self-employed businesses including restaurants and boarding houses, 30.6 percent of them earned between 12 million and 46 million won a year. About 21.2 percent made 12 million won or less. That means a majority of such businesses make an average 3.83 million won a month. When considering the cost of loans, rent and workers, the actual income could be less, and owners can fall deeper into debt if they are forced to close shop.

The outlook for restaurants and lodging is not favorable as a recent projection by the state-run Korea Development Institute projected the industry to struggle through the next year’s second half. Although various economic indicators including exports and manufacturing are showing signs of recovery, the service sector is expected to take more time to bounce back.