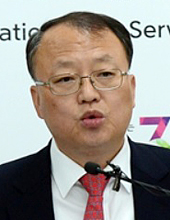 The National Tax Service under President Moon Jae-in is expected to get tougher on tax evasion.

On Sunday, the Blue House announced Han Sung-hee, head of the tax agency’s Seoul office, as Moon’s pick for commissioner of the National Tax Service, one of the government’s most powerful institutions.

Han, who majored in economics at Seoul National University, is known to be an expert in tax investigation as he headed several related departments over his two-decade career. From August 2014 until the end of last year, Han was in charge of the tax agency’s investigation department that tracked down white-collar tax evaders including high-wealth individuals and companies.

Han also has notoriety for being a workaholic with high expectations for the people working around him and is infamous for giving no favors to former tax officials in the private sector, a common practice when the tax agency audits companies that employ ex-government officials.

But while Han is strict about the tasks assigned to him, former colleagues say he is also understanding and always willing to lend an ear. One of the reasons, many say, is his past failure in passing the government’s civil service exam. He made seven attempts before passing on his eighth try.

Many observers believe Han will likely handle tax evaders with the same approach as his predecessor. The outgoing commissioner, Lim Hwan-soo, is also widely lauded as an expert in catching tax cheats.

Despite his doggedness though, under Lim’s watch, the number of tax investigations taken on by the agency has shrunk to the 17,000 range since 2014 from 18,079 in 2013 after he took office.

Instead, Lim has focused on encouraging more people to voluntarily report their taxes and heavily punished those who try to evade taxes through unlawful means.

Han has tried to make the national tax agency a “service” institution that caters to taxpayers depending on their difference needs since he became head of the Seoul office in December. One initiative has been giving leniency on tax audits to small and midsize companies that have a track record of honest payments.

Han has an international background, not only earning a master’s degree in business administration from the University of Michigan but also a certificate from the American Institute of Certified Public Accountants. He also has three years of experience at the OECD specializing in international taxation and accounting.