Franchisees hurt by bad behavior from the top

Franchisees hurt by bad behavior from the top 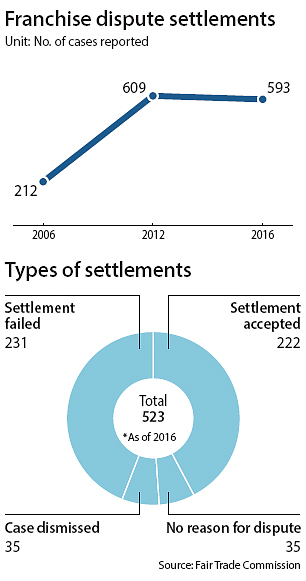 Franchise owners of fried chicken chain Hosigi Chicken are pleading with their customers not to boycott them for the misdeeds of the company’s chairman, Choi Ho-sig, after reports that he sexually harassed a female secretary.

“We were already having difficulties due to weak domestic consumption and the outbreak of bird flu,” said one Hosigi franchise owner, “but now our sales have dropped further due to the scandal.”

Another franchise owner said his sales fell by nearly half in one week. “We sold about 50 sets of double chickens a day, but now we are only able to sell about 30 a day,” he said.

The owner added that he and his wife have been taking home about 100,000 won ($90) a day, but he’s not sure whether he will continue to maintain those margins. “I hope time passes by fast so that everyone forgets about the scandal.”

The public controversy began on June 5, when CCTV footage showed the company’s chairman inappropriately touching his secretary. After the video leaked, some customers began boycotting Hosigi, raising concern about individual franchise owners getting their bottom lines hurt by the bad behavior of executives at the top.

“Recently, we received an order and started frying the chicken,” a franchise owner who has been working with Hosigi for 10 years said. “But then the customer called us back and canceled the order saying he is not going to be able to eat Hosigi anymore. We didn’t do anything wrong and what we only did was work hard. I really hope people don’t boycott our products.”

Many desperate franchise owners don’t have many options but to wait for headquarters to find a way of the mess. “If we made a mistake, headquarters might have ordered us to shut down right away,” one franchise owner said. “I really hope they come up with ways to help us through various measures like lowering the price of chicken delivered to us.”

Hosigi released an apology on June 9 and announced the chairman would step down from management. The company said it was still in discussions about how to help franchise owners affected by the scandal.

Choi’s secretary submitted a sexual harassment report to police on June 3, according to the Gangnam Police Station, but the victim withdrew the report two days later. The police still plan to summon Choi next week for its own criminal investigation.

It is not the first time franchise owners have been affected by problems at the top. Last year, Mr. Pizza had to close dozens of franchise stores after its chairman assaulted a janitor.

“The pizza company’s market share dropped from within the top three in the country to the top seven after the scandal,” said Kim Tae-hoon, an activist in an organization representing franchise owners. “There are so many scandals surrounding owners in the country, so franchise operators try not to talk about them as much as possible.”

“It is true that franchise operators run into direct trouble when their headquarters’ owners face scandal,” said Yim Young-tae, a director at the Korea Franchise Association, which represents franchisors. “We held two seminars for CEOs of member companies to teach about ethics last year.”

However, the association doesn’t have the right to force CEOs to attend the seminar. Choi of Hosigi, in fact, didn’t attend it last year.

Franchise owners argue they also aren’t receiving fair treatment from headquarters. Kim, the activist, said many franchise operators are not able to talk openly about unfair treatment out of fear of losing their license.

The Fair Trade Commission, Korea’s regulator of economic competition, is closely monitoring the franchise industry. The key goal of the agency is to ban headquarters from directly retaliating against their franchises.

Kim Sang-jo, the nominee for commissioner, said he would work on resolving unfair practices between franchises and headquarters.