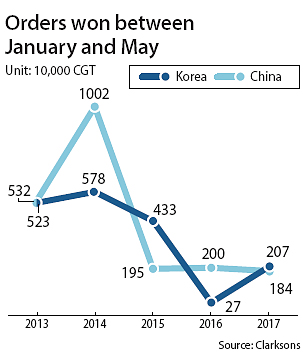 Korean shipbuilders have outrun their Chinese and Japanese competitors in winning new orders for two consecutive months, according to the latest figures from market analysis firm Clarksons on Monday.

“It is a positive sign amid prolonged declines in the global shipbuilding market that Korea has inked stable performance for two consecutive months since April,” a source in the local shipbuilding industry said.

The industry worldwide has been showing signs of recovery this year. Last month, the amount of new orders doubled from 850,000 CGT the previous month to 1.66 million CGT. By accumulated ship orders through May, the figure increased by 650,000 CGT year on year to 6.53 million CGT.

Still, the orders are not yet sufficient to keep yards running in full. The shipbuilding order backlog worldwide amounted to 76.19 CGT as of last month, a slight decline from 76.94 million CGT in April.

The country with the most backlog is China with 25.76 million CGT. Korea’s order backlog increased from April to 17.49 million CGT last month for the first time since 2015, but shipbuilding industry insiders say the rate is still small compared to good times.

“The data is relieving, but our docks are not yet fully operating, and it is too short a period to call the recovery a global trend,” a Hyundai Heavy Industries spokesperson said. “Trade volume must turn to recovery before we expect a boost in the shipbuilding sector.”

Vessel prices have been following the tide of increasing ship orders. According to Clarksons, the price of very large crude carriers, the largest type of operating cargo vessel in the world, inched up by $500,000 for the first time in three years to $80.5 million.