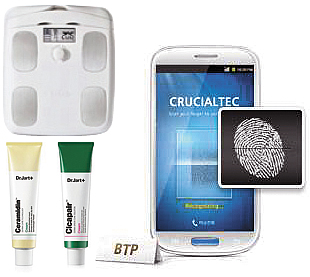 Dr. Jart+ is known worldwide for its cosmetics products packaged in containers that look more like medicine than makeup.

The brand’s history dates back to 2005, relatively young compared to other Korean cosmetics giants, but it has since entered over 30 markets and can be found in retail chains like Sephora and Douglas. The products have been featured in Vogue and InStyle, and in 2015, it became the first Korean cosmetics brand to receive equity investment from Estee Lauder.

Aiming for global markets from the beginning and investing aggressively in research and development are key to the overseas success of small and medium-sized enterprises like Dr. Jart+, according to a report released Monday by the Korea International Trade Association. The local trade organization analyzed 232 successful SMEs selected by the Small and Medium Business Administration and the Ministry of Trade, Industry and Energy as strong exporters. Each company reaped overseas sales of an average $63.3 million last year, according to the association. During the last five years, their exports grew an average 9 percent annually.

According to the analysis, the biggest booster for SMEs going abroad was tackling foreign markets from its early stage of business just as Dr. Jart+ had. “While the globalization of local companies used to be based off a strong domestic business, born-global companies tackle markets at home and abroad at the same time,” the report said.

Among the 232 small businesses in the study, 95 were found to have started exporting within three years after foundation. As these companies focused on foreign markets from the beginning, their first exports took only about 1.4 years on average, essentially starting exports as soon as they began business. These companies also reached $1 million in overseas sales in an average of 5.6 years.

Another key booster to successful globalization, the report said, is aggressive investment in R&D to be the “first movers” in the industry. On average, the 232 companies spent 2.7 percent of revenue on R&D. Among them, 62 companies spent over 4 percent on R&D.

Based on such heavy spending, these 62 companies developed “world’s first” technologies and products in their respective markets. Koh Young Technology developed the first three-dimensional automated optical inspection machine used to check parts assembly during manufacturing and started a trend away from two-dimensional machines.

Another local IT equipment company, CrucialTec, developed the first optical trackpad in 2006. Though it may seem passe now, the company foresaw a trend before the emergence of smartphones in applying computing capabilities on the phone and developed a pad that allows a user to move a cursor with the finger on a mobile phone screen.

“KITA’s research shows 73 percent of Korean exporters are seeing their products in the decline phase, past the growth and maturing phase,” said Cho Bit-na, a research fellow at the Institute for International Trade under the Korea International Trade Association. “This means it is pressing for our country to find a new growth engine for exports.”

Cho added that since technologies like online shopping sites have enabled easier entry into foreign markets, more small exporters are tackling foreign markets from their foundation.

“Our exports need to pull away from depending on conglomerates and focusing only on a number of products,” Cho said.