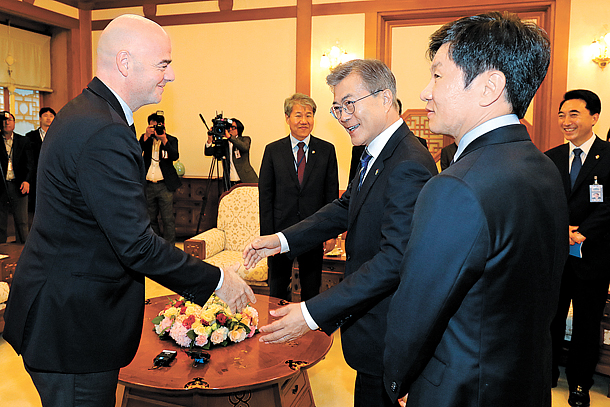 From left, Gianni Infantino, chief of FIFA, President Moon Jae-in and Chung Mong-gyu, president of the Korea Football Association, at the Blue House on Monday. [YONHAP]

Moon’s proposal came in a meeting with Gianni Infantino, chief of FIFA. The FIFA president arrived here last week to watch the FIFA Under-20 World Cup final between England and Venezuela held Sunday.

“I believe it would help promote peace in the region if Northeast Asian countries, including South and North Koreas, could jointly host a FIFA World Cup,” Moon told the FIFA president, according to his spokesman Park Soo-hyun.

“I will see if I can create such an opportunity for the 2030 World Cup,” the South Korean president was quoted as saying.

Infantino said there will likely be “difficulties,” but noted such a vision itself “can be a very powerful message,” according to the Cheong Wa Dae spokesman.

The FIFA chief also offered to run the possibility by other Northeast Asian leaders, starting with Chinese President Xi Jinping, whom he said he was scheduled to meet in two days.