Abacus math, Go and hanja are on the rise

Abacus math, Go and hanja are on the rise 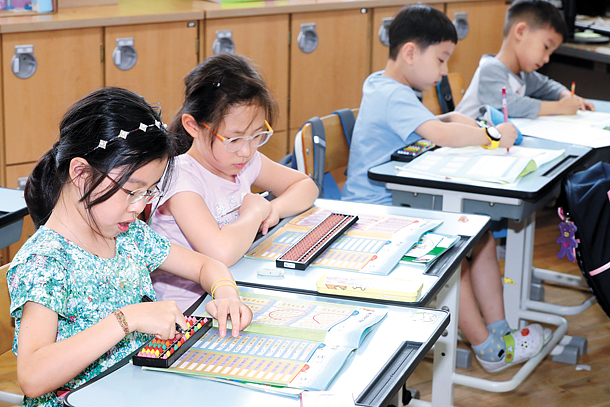 Despite the general hubbub about the fourth industrial revolution, many Korean parents are turning to more traditional forms of education, including the game of Go, abacus math and Chinese characters.

At the Seoul Woosol Elementary School in southern Seoul, one of the more popular afterschool programs is not about robotics or English, but abacus math.

“Some afterschool classes get canceled because not enough students apply, but this class on abacus math is always packed,” said Choi Mi-yeon, vice principal of the school. “We often have to draw lots because there are more than 100 who apply.”

At the abacus math class on June 2, some 20 students were seated in rows in a semi-circle, facing the teacher, who handed out sheets of paper with 20 math problems on them.

At the teacher’s direction, the students simultaneously turned over the papers and started calculating, using the colorful abacuses on their desks.

“I’m done, teacher!” shouted a student, raising her hand after about 36 seconds. Within one minute, all hands were up in the air.

“I love using the abacus,” said Lee Sang-ah, a fourth grader. “It helps me not to get confused because I can see the calculation in front of my eyes.”

“I had a hard time catching up with math after I came back from a year abroad,” said Jang Seok-hoon, also in the fourth grade. “After I started taking the abacus class, I became much more confident with numbers.”

The afterschool program on abacus math is held at the elementary school four times a week. The program is run by SE After-School Education Center, which also runs similar programs at 10 elementary schools in Seoul.

“I teach abacus math at four other elementary schools in addition to Woosol,” said the teacher, Kim Ji-hyun. “The program is popular everywhere, as we run three to four classes at each school, and all the classes are packed.”

“Twice as many students are signing up for classes on abacus math, Go and hanja [Chinese characters],” said Yang Jae-young, the center’s CEO. “The applicants for these classes grew exponentially in Gangnam and Seocho districts, which are known as the heart of education in Seoul.”

“We received a lot of feedback from parents who wished the school would open up new classes for Go and hanja,” said Kim Gyeong-yeon, a teacher in charge of afterschool programs at the school. “Because of the high number of applicants to these classes, in addition to abacus math, we have to draw lots among students.”

According to the Korea Baduk Association, which uses the Korean name for Go, baduk, about 1,500 elementary schools out of 5,880 in the country ran afterschool Go programs last year.

Some experts are welcoming parents’ increased attention to these classes.

“When calculators and computers hit the market here in the 1980s, abacus math almost disappeared for more than 20 years,” said Kim Sun-tae, professor of continuing education at Dongguk University in central Seoul. “But recently, more parents started seeing that training in abacus math is an excellent way to improve their kids’ attention span and memory retention.”

There are at least 100 private academies offering abacus classes in Seoul, according to the National Abacus Mathematics Education Association.

“I couldn’t find one near us so my husband and I are looking to hire a private tutor to teach abacus math to our 8-year-old daughter,” said a 42-year-old resident of Gwacheon, Gyeonggi.

“I’m hoping to improve my son’s attention span and help him become a better person by learning Go,” said Cho Eun-joo, a 36-year-old resident of Munrae-dong, western Seoul. Her son, 10, attends a Go class at his school.

“Some people don’t understand parents who send their kids to afterschool programs for more traditional education instead of to private academies for English,” said Nam Ji-seon, a 40-year-old mother. “My son, 12, has been learning hanja for seven years now. No matter how much the world changes, there are things that children must learn from traditions.”

She added, “We often discuss the traditional analects of Korea written in hanja, and I know that this kind of education will give him an edge in the future.”

Some experts, however, caution parents against pushing their children into any form of education.

“The basics in any elementary school education are not about picking and choosing among different types of education by calculating their usefulness, but about helping the students find joy in learning,” said Song Ki-chang, professor of education at Sookmyung Women’s University in central Seoul. “All education on abacus math, Go and hanja can have negative effects on the students if it is enforced in a one-sided manner.”