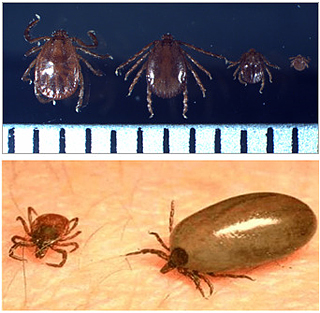 Top: From left, female adult, male adult, young and nymph Ixodid ticks. Bottom: The Ixodid tick species before, left, and after it has fed on blood. [KOREA CENTERS FOR DISEASE CONTROL PREVENTION]

Four other people on Jeju have come into contact with the newly emerging infectious disease this year. The woman died last Friday, four days after she was hospitalized for breathing problems and a high fever. She tested positive for SFTS. Health officials said she had been suffering from diabetes and high blood pressure before the bite.

Most cases are in North Gyeongsang, Gangwon, Jeju Island and South Gyeongsang, among people over the age of 50. The Ixodid tick species is the known carriers of the virus, which is most active between April and November.

Symptoms include fever, vomit, muscle spasm, a headache, low levels of blood platelets, a decrease in the number of white blood cells and higher levels of serum enzyme. Severe cases can lead to multi-organ failure. The incubation period is six to 14 days.

Health officials have advised the public, especially aged farmers and loggers who spend most of their time in forests or grass, to wear long-sleeved shirts and pants. Tick repellents can also come in handy.