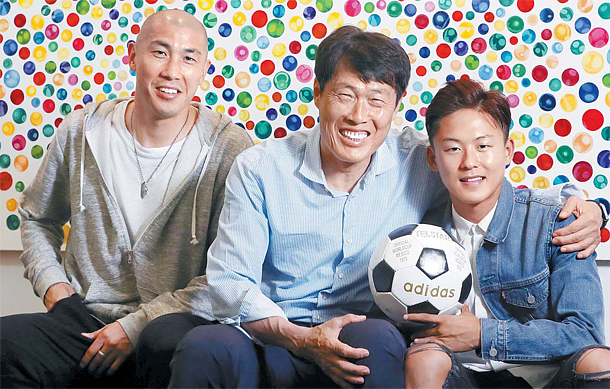 After Korea was eliminated from the round of 16 at the FIFA U-20 World Cup, the players have now gone back to competing for their chance to play in their clubs.

Before he left to Spain, Lee Seung-woo visited Cha Bum-kun’s house on June 7 to talk about the recent FIFA U-20 World Cup, their experience in the European league and playing for the national team, along with Cha Du-ri.

The two Chas come from a football background where Cha Bum-kun was vice president of the local organizing committee for the 2017 FIFA U-20 World Cup and a record holder for the single-season scoring for a Korean in Europe, and Cha Du-ri was a member of the Korean national football team at the 2002 World Cup, playing in a total of 76 matches for Korea.

The U-20 Korean national football team experienced heaven and hell at the U-20 World Cup, where they became the first team to advance to the round of 16 in the group matches but got eliminated right away in the round of 16 by losing 3-1 to Portugal.

“When I watched the match against Portugal, I could tell that their physical condition was different from in the group matches,” Cha Bum-kun said. “They were nervous and stiff, which shows that they lack experience.”

Cha explained how players at Lee’s age all have the potential to make explosive development in a short period of time.

Though there were regrets over the team’s early exit, now is the time for Lee to put that aside and focus on his club, F.C. Barcelona Jevenil.

“I have to further challenge myself and now I see how great an achievement Cha made throughout his career,” Lee said. “I will not disappoint.”

Lee, who left for Spain at 14, trained with the goal of joining F.C. Barcelona upon ending his juvenile career.

But from the recent U-20 event, Lee saw the possibility that he may be wearing a different club’s uniform. Currently, he is negotiating the renewal of his contract with Barcelona, which ends in June 2018, but other clubs in France, Germany, the Netherlands and Portugal are offering him guaranteed playing time on their primary teams.

“There is no need to rush about,” Cha Du-ri said. “F.C. Barcelona is by far the best club in football. That said, it is hard to find a spot on the team because you have to compete against the best. To survive in the main club, it may be better to play on a team that guarantees full playing time.”

When Lee and Paik Seung-ho showed their potential at the U-20 World Cup, both Cha Bum-kun and Cha Du-ri mentioned that the Korean national football team should include young rising stars in the roster to help them improve.

“In Germany and other European clubs, they include young rising stars on national teams so they can learn from senior players,” Cha Bum-kun said. “And I also learned my shooting from Lee Hoe-taik when I got called to the national team at 17. From that experience, when I coached for the 1998 French World Cup, I included Ko Jong-soo and Lee Dong-gook, who were in high school at the time.”

Now, the discussion regarding the inclusion of the young players may be a sensitive issue, as the Korean national team is playing in the final qualification match for the 2018 Russia World Cup, but there is a need for this issue to be considered by the head coach.

Lee has received offers to naturalize as a Spanish citizen, but accepting those offers was never an option.

“I wanted to represent Korea,” Lee said. “I don’t know when I’ll get called to the national team, but until then, I’ll be training hard.”