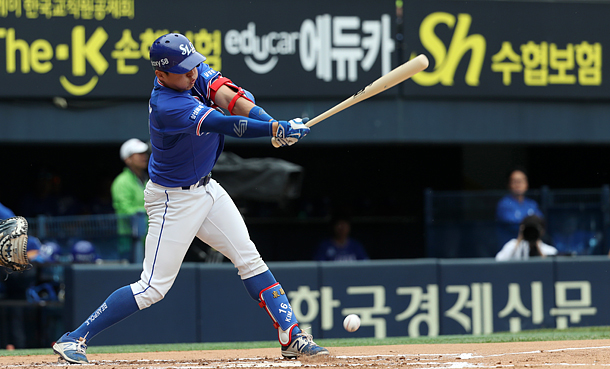 Kim Jeong-hyeok of the Samsung Lions during a game against the Doosan Bears on June 6 at Jamsil Baseball Stadium. Kim, who is older than most Korean baseball players, has finally made his name known to the Korea Baseball Organization for the first time since he turned professional in 2009, with the Sangmu Baseball Team in the futures league. [YONHAP]

At 33, Kim Jeong-hyeok of the Samsung Lions is receiving attention much later than others in his baseball career.

Kim, who was an unknown player in the Korea Baseball Organization (KBO), has now become one of the Lions’ leading batters, having a batting average at 0.385 with seven RBIs as of Monday.

But it wasn’t always so easy. During his senior year at Posco High School and at Dongguk University, Kim failed to get drafted by any of the KBO teams. It was quite a disappointment for him, as he once got called up to the Korean national baseball team while playing for Dongguk University.

“I got injured my senior year, but I thought I would still get drafted,” Kim said. “Few teams offered me to be their developing player, but I was given an opportunity to join Sangmu. It was good that I got to continue my baseball career at Sangmu.”

When he joined the Lions in 2011 after playing for Sangmu Baseball team, he joined as the Lions’ developing player. During his first year, Kim managed a batting average of over 0.400 in the futures league, but once he got promoted to the KBO, he wasn’t given an opportunity to play.

At one point, he injured himself from training too much. Every night, Kim and Kim Hun-gon were the only two players that stayed until the very end to practice.

“I thought if I worked harder, I will be given an opportunity to get promoted to the majors,” Kim said. “I trained a lot and that was the problem because I was sick for three years. Now, I know when to rest and when to practice.”

Last year, he appeared in a total of 46 games, the most number of games played since his KBO debut, but Kim quickly got relegated to the futures league again, as he failed to perform.

“Since I’m pretty old as a baseball player, I thought our offseason training in winter was my last chance to get back to the KBO but once again, I let go of my chances,” Kim said. “But because I love baseball, I set my goals again and continued. Even the Lions’ coaches encouraged me, saying I can do it.”

On June 6, when he was finally given another chance after Lee Won-seok and Cho Dong-chan were absent from an injury and poor condition. That said, as soon as Kim got registered to the entry list, Kim appeared as the Lions’ fifth hitter and had four hits to help the team win.

And during the game against the Hanwha Eagles on June 9, Kim got in the batter’s box in the ninth while the Lions were losing 5-4 and had a winning hit.

Now, Kim has finally made his name known in the KBO, but he doesn’t want to get ahead of himself just yet, as he is still not done with his season and bigger ambitions have led him to fail in the past.

“When I hit my first home run as a professional last year, I wanted to achieve more,” Kim said. “And this prevented me from playing well. So this year, I tell myself not to get excited and to start over again in each game.”

When Kim was in the futures league as an unknown, rather than giving up his career as a baseball player, he worked harder to build the sharp swing he has now. This may be the driving force for Kim’s success in the KBO now.