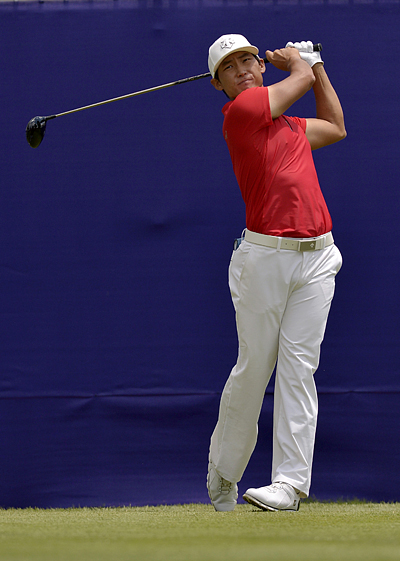 Kim Meen-whee during the FedEx St. Jude Classic at the TPC Southwind in Memphis, Tennessee, on Sunday. [AP/YONHAP]

Kim Meen-whee is certainly on the rise, as he earned a last minute ticket to the U.S. Open at Erin Hills, Wisconsin, starting on Thursday.

The United States Golf Association announced the six additional players to fill up the 156 man field for the U.S. Open on Monday, where they originally put aside the six spots for those who moved into the top 60 in the world ranking upon completion of the FedEx St. Jude Classic.

Since Chris Wood of England was the only player ranked inside the top 60 to not have an exemption, the remaining five players were chosen from the sectional qualifying sites alternate list.

Kim, who was the first on the alternate list in sectional qualifying at Tennessee, in June, was among the five along with Davis Love IV, Ryan Palmer, Gregory Bourdy and Todd Light.

With the berth, this will be the first time for Kim to be competing at the PGA tour’s major tournament.

Recently, Kim recorded his best finish on the tour, tied for second at the FedEx St. Jude Classic at the TPC Southwind in Memphis, Tennessee.

Throughout the event, Kim recorded his personal best average driving distance at 304 yards and had 61.11 percent in greens in regulation.

Before the tournament, Kim’s best finish in the PGA tour event was tied for third at John Deere Classic in 2016.

Not only was this Kim’s best career finish, it also allowed Kim’s season-long FedEx Cup ranking to move from 115th to 65th.

After winning a gold medal at the 2010 Asian Games in Guangzhou as an amateur, Kim turned professional in 2010 and since then, he has one KPGA tour victory at the 2012 Shinhan Donghae Open.

Kim then went on to the 2012 PGA Tour qualifying school, where he led the field in second and third round. Since Kim wasn’t able to finish within the top-25, finishing 43rd, he earned a Web.com Tour status. After playing on the Web.com tour in 2013 and 2014, Kim started playing on the PGA tour in 2015.

As Kim got his name added to the final field in the last minute, there will be a total of four Korean players teeing off this weekend, Kim Si-woo, winner of the 2017 Players Championship, An Byeong-hun and Wang Jeung-hun, who earned their spot by ranking inside the top 60 in the world ranking.

Throughout the 117 years of U.S. Open history, Yang Yong-eun’s third place finish at the 2011 U.S. Open at Congressional in Bethesda, Maryland was the best finish made by an Asian golfer.

This is the first time the U.S. Open, one of four major tournaments in golf, is being played in Wisconsin.

All four rounds will be aired live on the JTBC Golf channel.