For stable job, public sector is the way to go

For stable job, public sector is the way to go 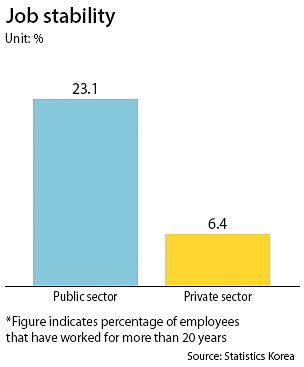 Government workers enjoy more employment stability than their counterparts in the private sector, Korea’s statistics agency reported Tuesday, as the Moon Jae-in administration hopes to shore up the public sector by creating more jobs in government.

Statistics Korea found that 86.3 percent of workers in the public sector remained in their positions between 2014 and 2015, much higher than the 65.2 percent retention rate in the private sector. In general, government employees tend to stay in their jobs longer than those in the private sector. About 23.1 percent of government workers have spent more than 20 years on the job, compared to 6.4 percent in the general population, and 22.4 percent of public-sector employees have worked for 10 to 20 years, compared to 12 percent among Koreans overall.

This is the first time the agency has released data on jobs in the public sector. “We have provided the data on workers in the public sector to be used for setting policies surrounding them,” said Eun Hee-hoon, a director at Statistics Korea. “We analyzed 17 types of data including tax reports and health care benefits for this statistics.”

On the campaign trail earlier this year, one of President Moon’s key promises was to expand the number of government jobs. His administration has vowed to increase the number of civil servants by 12,000 this year. Opposition parties have criticized the policy as financially burdensome.

The statistics agency also found that men work longer than women in the public sector, following a general trend in Korea. Among male government employees, 28.3 percent have worked for more than 20 years, compared to 16.5 percent for women.

By type of job, education-related positions, including public school teachers and administrators, made up a majority 34.6 percent. Public administration jobs comprised 31.4 percent, and the military hired 12 percent.