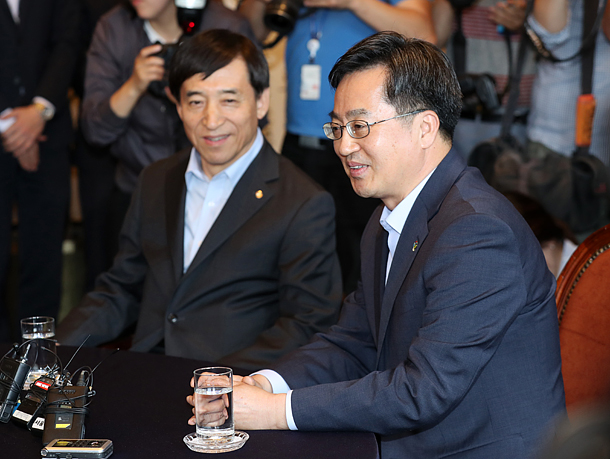 Finance Minister Kim Dong-yeon, right, and Bank of Korea Governor Lee Ju-yeol talk ahead of a lunch meeting to discuss economic affairs at the Bank of Korea headquarters in central Seoul Tuesday. [YONHAP]

Finance Minister Kim Dong-yeon cited an overheated housing market as a major source of concern and announced a crack down in his first meeting on Tuesday, intensifying President Moon Jae-in’s campaign to curb risks in the property market and growing household debt.

“The government has spotted a build-up of overheating in some parts of the country, including Seoul,” the minister noted, “We’ve launched a joint monitoring team to detect any irregularities and speculative investment moves.”

The monitoring force, consisting of 231 officials, started a crack down Tuesday to penalize the illicit transfer of home-purchasing rights and the exchange of savings accounts for housing deposits.

The Ministry of Strategy and Finance used unusually strong words, saying those caught will face “the toughest penalties possible.”

Measures tailored to different regions will soon be announced, the Finance Ministry said in a statement.

Still, the specific direction of lending requirements - loan-to-value (LTV) and debt-to-income (DTI) ratios - has yet to be announced.

Market analysts believe those requirements will be tightened when the government announces a comprehensive housing oversight measure in August.

The move comes as the country has seen signs of an exuberant housing market ahead of an anticipated rate hike from the U.S. Fed in June.

The Bank of Korea had been firm in its stance to “accommodate” the economy, which means it intends to shore up the economy through monetary easing policies.

Gov. Lee Ju-yeol, however, hinted earlier this week at the possibility of shifting this stance, should the country’s economy continue to improve.

When a rate hike is expected, people tend to rush to lend before interest rates rise even more.

Authorities believe that this expectation is fueling excessive demand for buildings and permits for new construction.

The estimated supply of apartments in June stands at 57,429, the highest since 2000, though the summer season is considered a slow time for the housing market.

The booming regions include Gangnam in southern Seoul, Busan and Sejong City. The oversight team also cited the three regions as their major target area.

Some of the realtors in the areas are hunkering down by suspending their businesses, according to multiple media reports.

Unit prices in the complexes in Apgujeong-dong in Gangnam District, southern Seoul, that will undergo redevelopment have reached 100 million won ($88,928) to 300 million won over the last three months.

The heated demand was also felt in other cities including Busan. The price for a 71.57 square meter (770 square foot) apartment in Deokpo, Busan, shot up 37 percent in a just a month. A redevelopment area in Ilgwang, Busan, also has seen a rise of illegal transfers of purchase rights recently.

The Finance Minister went on to meet Governor Lee for lunch after the meeting with vice ministers and officials from the ministry and other related agencies.

The two said that their respective bodies will work closely to prop up the economy.