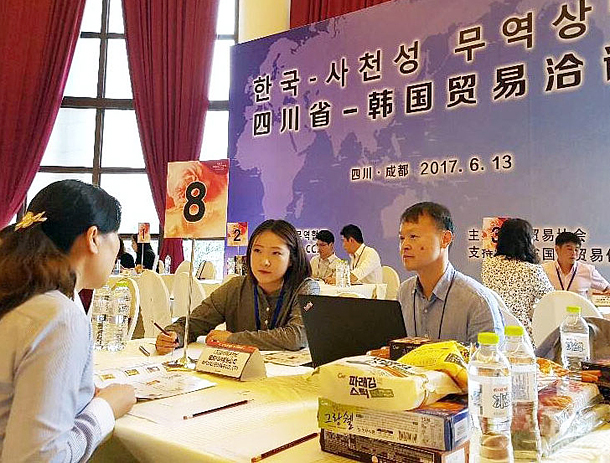 Representatives from the Korea International Trade Association, one of the nation’s five major business groups, have left for China to promote trade between the two countries, the association said Tuesday.

The group’s trip is the first since bilateral relations grew sour late last year over deployment of a controversial U.S. antimissile system on Korean soil that China argues threatens its security. The diplomatic row has since spilled over into the trade realm, with Chinese consumers boycotting Korean-made goods.

The KITA team, consisting of 25 consumer goods exporters from Korea, is participating in business consulting programs in the midwestern regions of China including Chengdu and Wuhan from Tuesday to Friday and will visit relevant trade institutions in the country.

“The recent deterioration in bilateral relations led many local companies to eye other markets like Southeast Asia instead,” the Korean trade association said in a statement. “However, we figured we can’t give up on China.”

China is Korea’s largest export market, not to mention for the world. Once the Beijing government’s Belt and Road Initiative, which aims to connect trade routes to Europe and the Pacific via China, comes to fruition, China is expected to have a larger influence in the global market.

For Korea, trade with China has been seen as especially favorable because the two already have a free trade agreement, and Chinese consumers have shown a liking for Korean goods, particularly food and cosmetics.

The 34 Korean representatives, mostly from small and midsize enterprises dealing in food, cosmetics and apparel, attended a business consulting program on Tuesday in Chengdu that attracted more than 90 Chinese buyers. An event scheduled for Thursday in Wuhan is expected to attract 100 Chinese buyers.

The team dispatched this week is the 34th of its kind. The Korea International Trade Association has been sending representatives of small and medium-sized businesses on trade missions to China since 2001 with the goal of boosting Korean exports to China. So far, 958 Korean companies have participated.

“Difficult situations call for harder knocking on the doors to the Chinese market,” said Kim Jung-kwan, vice chairman of KITA who led the mission team. “We should be prepared for the time ice melts between the two countries.”

The association plans to dispatch two more teams on trade missions this year. In October, representatives from about 30 Korean companies are scheduled to visit Beijing and Shanghai, and in November, another 30 will go to Guangzhou.