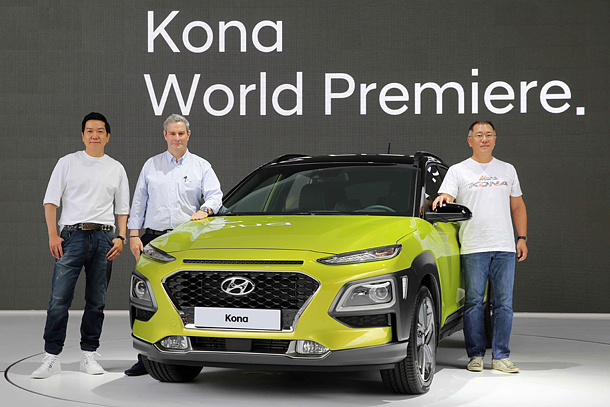 Hyundai Motor took the wraps off its first global subcompact sport utility vehicle, the Kona, on Tuesday, with the hope that it will save the Korean automaker from declining sales in major markets including the United States and China.

Named after a district on Hawaii’s Big Island, the Kona will go on sale in Korea this month. Exports to Europe will start in August and the United States in December. Hyundai’s target is younger drivers looking for an affordable and modestly-sized car.

“From New York to Los Angeles and London, Hyundai Motor rolled out a thorough market research study and concluded that the small SUV market will continue to grow even though the SUV industry is pretty saturated at the moment,” said Chung Eui-sun, vice chairman of Hyundai Motor Group, during a presentation to launch the car at Hyundai Motor Studio in Goyang, Gyeonggi, on Tuesday.

Chung, who is making his first media appearance in Korea since he announced the spinoff of Hyundai’s Genesis brand in 2015, appeared wearing a casual T-shirt and jeans to reflect the vibe of Kona’s target demographic. His presence at the event suggests the high importance that Hyundai is placing on the new model in its global strategy. 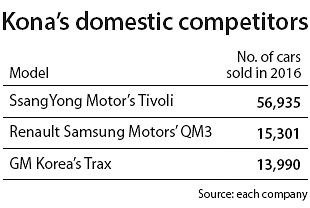 “Automakers are competitively jumping in the burgeoning small SUV market, but Hyundai Motor thought providing the distinctive value of Kona was more important than advancing in the market too hastily,” Chung said.

Between January and May this year, Hyundai Motor’s sales in the United States fell 4.8 percent from last year, totaling 291,853 cars, which is why Kona’s success is especially crucial for the company. Hyundai, which leads the Korean market and ranks fifth in the world in terms of sales, plans to export 19,000 Kona cars next year. In Korea, it plans to sell 26,000 Konas this year and 45,000 or more next year.

The much-hyped vehicle first surfaced as a project codenamed OS in 2014 and inherits the Hyundai family look with a mesh-type cascading grille in the front.

Everything else, though, has changed. Luc Donckerwolke, head of Hyundai’s design center and a former designer at Lamborghini and Bentley, said he didn’t want to design “one more SUV” but “create a new icon for Hyundai” with the Kona.

The lamp cluster in the front and rear has been divided into two separate types of lamps: extremely slim daytime running lights that include turn signals and an LED lamp positioned underneath.

The company implemented what it calls “Armor,” black plastic cladding, on all four wheels’ fender which gives the vehicle a sporty demeanor.

The car’s body frame is lower than other models from the same segment, by about 50 millimeters (2 inches) according to the company, and provides a more stable and agile impression from the front. It also lets drivers more easily get into the car compared to larger SUVs with a higher body frame.

Although the Kona falls in the entry-level SUV segment, Hyundai Motor has amplified the driving performance with a high-powered engine and “smart car” technology.

The Kona will come with a 1.6-liter 177-horsepower petrol turbo GDi engine. By comparison, the Creta, Hyundai Motor’s strategic subcompact model for emerging markets like India and Russia, has horsepower of 126.

European customers will have the option of choosing between a 1.0-liter and 1.6-liter petrol turbo GDi engine. Hyundai Motor said it will add a 1.6-liter diesel option by next year.

Hyundai Motor has included some high-tech systems in the Kona to make the driving experience more convenient and safer. It is equipped with smart sensors including forward collision avoidance-assist, lane-keeping assist, a driver attention warning system and blind-spot collision warning system.

For the first time in the segment, Kona has installed a combiner-type of head-up display that shows driving information such as speed, map data, and fuel level on a separate piece of glass that pops up behind the steering wheel when the engine is turned on. Existing head-up displays project information on the windshield.

Kona passengers will be able to wirelessly charge their phones and use Apple CarPlay and Mirror Link in conjunction with their smartphones.