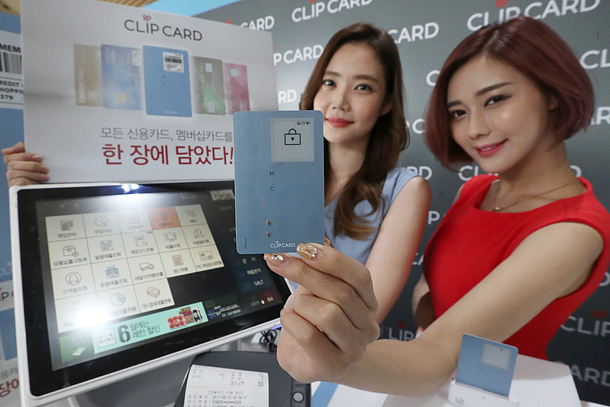 Models demonstrate KT’s CLiP CARD on Tuesday at the company’s headquarters in Gwanghwamun, central Seoul. The card is a wallet-sized device that can store up to 21 different payment and membership cards. [KT]

KT, Korea’s second-largest telecom company, on Tuesday unveiled a device called “CLiP CARD” that can store up to 21 different payment and membership cards, the company’s latest attempt to expand its share in the local financial market.

The goal of CLiP CARD, the company said, is to slim the wallet by putting all of a user’s cards in one credit card-sized device. After storing their card information on the device, users can change which card they would like to use for transactions by pressing a physical button that scrolls through options on a 1.3-inch screen. They can then run CLiP CARD through a card reader, just like a traditional credit card, to make the payment.

“Korea boasts one of the highest credit card penetration rates in the world,” said Kim Hyung-wook, head of KT’s platform service business. “KT considered such facts and decided to couple them with its information and communications technology in developing CLiP CARD.”

According to the company, the share of mobile payment services like Samsung Pay is only 1.7 percent of the entire payment service market in Korea. KT cited various reasons including the services’ heavy dependency on certain software and hardware.

Meanwhile, old-school credit cards have become the most frequently used payment method in Korea, which is why KT decided to make an all-in-one payment device that can be used like any regular credit card.

KT, the lead company in the consortium that created Korea’s first internet-only bank, is hoping to take a bigger share in the local financial market through CLiP CARD.

“We would like to cooperate with local card companies and commercial banks and create a new ecosystem for financial transactions,” said Moon Jong-yong, a director at KT’s platform service business. “Our goal is to sell 300,000 CLiP CARDs by 2017 and become the top simple payment service provider in 2020 by enabling some 2.7 trillion won [$2.4 billion] in financial transactions.”

A few major credit card companies in Korea including Lotte Card have partnered with KT in bringing CLiP CARD to the market. The device will cost 108,000 won, though KT says the price of the device can go all the way down to zero through various promotional channels.

At the moment, a CLiP CARD does not have an integrated circuit chip necessary to function as a transit card, but the company says it can still be used as one through the T-money system.

KT said the CLiP CARD can run for three to four weeks on one charge through a small, high-volume battery. Moon said this was the breakthrough that enabled development of the device.

“We announced development last year, but it was difficult to put all the concepts we envisioned on one card,” Kim said, “which is why it took some time.”