Dennis Rodman returns to North Korea, this time possibly to make a deal

Dennis Rodman returns to North Korea, this time possibly to make a deal 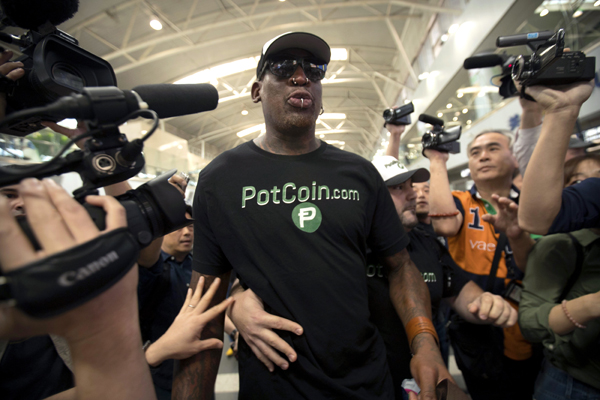 Former NBA basketball player Dennis Rodman arrives at Beijing Capital International Airport in Beijing, Tuesday. North Korea is expecting another visit by former NBA bad boy Rodman on Tuesday in what would be his first to the country since President Donald Trump took office. [AP/YONHAP]

Former NBA star Dennis Rodman was expected to arrive in North Korea Tuesday amid escalating tensions between Washington and Pyongyang and three days after the regime threatened to test an intercontinental ballistic missile powerful enough to reach the U.S. mainland at "any time" its leader Kim Jong-un wishes.

Citing two unnamed North Korean officials, CNN reported Tuesday morning that Rodman planned to touch down in Pyongyang later that day. The sources reportedly gave no further details, however, such as the purpose of the visit or whether Rodman would meet with Kim.

Rodman was spotted at Beijing International Airport but did not answer questions, the news agency said. A senior U.S. official said the State Department was aware Rodman was scheduled to travel to the North, but stressed he would not be there in any official capacity, according to CNN.

The retired athlete was a former contestant on U.S. President Donald Trump's reality TV show "Celebrity Apprentice," which Trump hosted before running for office, and went on to endorse Trump during election season. It is not known whether the White House had any involvement in Rodman's latest visit.

Rodman has been known to travel to the North at least four times. His visit in January 2014 received media attention when he led a group of former NBA players to play a friendly basketball match with North Korean athletes, supposedly as a birthday gift for Kim, who is an avid basketball fan.

Rodman was filmed singing a "Happy Birthday" song to Kim and later calling him a "very good guy" and a "friend for life." The game ended 110 to 110.

When Rodman visited the North in February 2013 with the Harlem Globetrotters, an exhibition basketball team, Kim was said to have personally gifted him with a present that said, "For our friendship."

The purpose of Rodman's visits has long been unclear. He once called it "basketball diplomacy."

A retired South Korean government official who spoke on the condition of anonymity said the fact that a U.S. official confirmed Rodman's visit to a news agency "could be a hint that the North and U.S. governments were engaged in some kind of talks."

The former official added, "At a time when North Korea is heightening tension with its nuclear weapons and missiles, the U.S. government can feel a bit hesitant to reach out to the regime for negotiation, but a civilian like Rodman can absolutely pull off the role of an arbitrator."