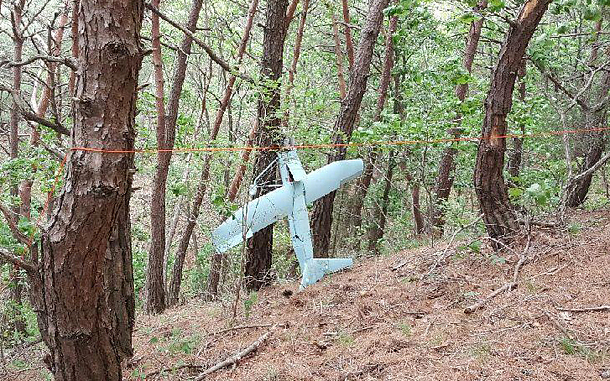 A North Korean drone was found last week on a mountain in Inje, Gangwon. The drone had taken photos of the Terminal High Altitude Area Defense site in Seongju County, North Gyeongsang, 168 miles south from the demilitarized zone. [YONHAP]

A North Korean drone found last week by a South Korean civilian had spied on the Terminal High Altitude Area Defense (Thaad) antimissile site in Seongju County, North Gyeongsang, before crashing into a mountain in Inje, Gangwon, on its way back to the North, according to local military officials.

The drone had traveled at least 270 kilometers (168 miles), the distance between the demilitarized zone and Seongju, to reach the Thaad field.

The South Korean military had not known about the flight until an Inje resident retrieved the drone from a mountain last Thursday at 11 a.m. and reported it to authorities the following day.

“Around 10 photos were found in the Japan-made Sony camera attached to the drone,” said a South Korean military official Monday, who embargoed the story until Tuesday. The photos of Thaad, he said, were among “several hundred,” which mostly featured mountains and civilian areas.

Local officials had to restore the camera because it was initialized, or formatted, by the time they got it. Further analysis was underway.

The South Korean military said the drone had started taking photos from the north side of Seongju all the way down to the south, then continued as it flew back towards North Korea.

“The drone was similarly shaped to the one found in March 2014 on Baengnyeong Island in the Yellow Sea, but a bit larger in size,” said a military official. “The drone was equipped with a twin-engine and GPS device.”

In one of its latest vitriolic backlashes, the state-run newspaper Rodong Sinmun ran a statement from the so-called Pan-Korean Emergency Measure Committee for Opposing Nuclear War Drills Against the DPRK Monday, saying the antimissile system evades “rebukes of neighboring countries and curry favor with the U.S. administration to prolong their remaining days.”

The article continued it was “another heavy crime and unpardonable pro-U.S. act of treachery.”

South Korea’s agreement with the United States to deploy the Thaad battery was part of Washington’s strategy to dominate the Asia Pacific region and thus “plug the South Korean regime into its project for building its global missile shield,” the statement continued.

At one point, the North Korean committee said Kim Kwan-jin, former head of the National Security Office under the Park Geun-hye administration, and National Defense Minister Han Min-koo, both of whom led the deployment deal, must immediately be executed.