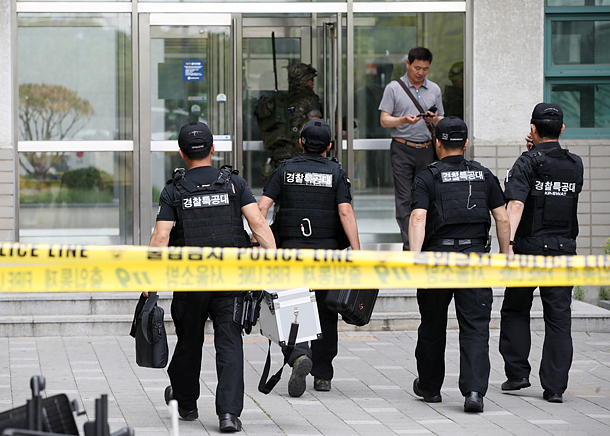 A special police force unit enters Engineering Hall 1 at Yonsei University in western Seoul on Tuesday after a homemade bomb detonated in a professor’s office on the fourth floor. [YONHAP]

A homemade bomb containing screws, gunpowder and batteries went off at Yonsei University in western Seoul on Tuesday morning, injuring a professor after he opened the mysterious box that had been left hanging on the doorknob of his office door.

The professor, surnamed Kim, who works at the School of Mechanical Engineering, arrived at his office on the fourth floor of Engineering Hall 1 on Tuesday morning and found a paper bag hanging on the doorknob to his office. Inside was a box.

Kim brought the bag into his office, took out the box, and opened it. The bomb went off immediately. It was around 8:40 a.m.

He suffered first and second degree burns on his wrist, arm, chest and neck, and was treated at Severance Hospital next to the university campus.

About 70 police officers were dispatched to the university. They quarantined Engineering Hall 1, but did not find any more bombs and ended the quarantine at 1 p.m.

The culprit was not identified as of Tuesday afternoon. Police have begun examining the CCTV camera footage from the building, but said the scope of the two cameras on the fourth floor of the building does not entirely cover the door to Kim’s office.

They added it is also difficult to determine how the culprit came and went because Engineering Hall 1 is connected to halls 2 and 3.

According to authorities, the bomb was made with a tumbler, which was filled with screws, gunpowder and four AA-sized batteries. They had not determined as of Tuesday afternoon if a switch was used to detonate the device.

The screws remained inside the tumbler, according to authorities.

Nail bombs have been used in terror attacks before in Manchester and Boston. Nuts and screws were found around the detonation point at the Manchester Arena, where bomber Salman Abedi blew himself up after a concert by American pop star Ariana Grande, killing 22 and injuring dozens on May 22.

In the Boston Marathon terror attack in April 2013, which killed three and injured at least 264, the bombs set off were contained in pressure cookers, which contained nails, ball bearings and metal pieces, according to the FBI.

The Islamic State, which claimed responsibility for the Manchester attack, has reportedly distributed videos online on how to make bombs at home using nails and other pieces of metal.

Authorities have not ruled out the possibility that a student may be responsible. Police questioned some students at Kim’s lab on Tuesday.

The final exam for Kim’s class on mechanical engineering mathematics was scheduled for June 20.