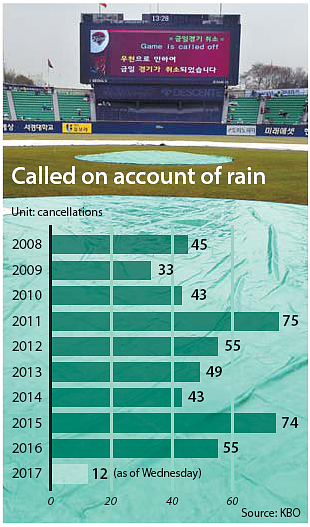 Baseball once again helps us recognize the seriousness of drought in Korea this year. The Korea Baseball Organization (KBO) has completed 41 percent of its season as of Tuesday, and so far, only 13 games have been canceled due to rain.

Since none of Korea’s baseball stadiums, except Gocheok Sky Dome in Seoul, have covers, weather strongly affects the KBO’s games.

But this year, not many games were cancelled due to a continuing drought. Over six months, Korea has had 69 percent of its normal precipitation level.

As a result, only five games in April, six in May and two in June were canceled.

April 5 was the only day this season for all five stadiums to cancel their games. By comparison, 22 games were canceled before June 6, 2016.

“We’ve never had a season like this year, getting so little rain,” said a KBO associate.

On June 6, an hour before the Doosan Bears’ game against the Samsung Lions, it started to rain at Jamsil Baseball Stadium.

“It’s been a while since the last time I saw rain,” said Kim Han-soo, manager of the Lions. “We’ve been struggling with our starting rotation, so I hope the game gets canceled.”

But the rain started to slow down right around game time and eventually stopped.

Currently, 33 cities and counties are experiencing dangerous levels of drought. According to the Ministry of Public Safety and Security’s drought alert for June, there won’t be much rain for the rest of the month, either. Even worse, Korea will be getting a lot less rain during its usual rainy season this July.

With the summer approaching, players have found it difficult to stay well rested since so few games have been called off.

That said, Kim Ki-tae, manager of the Kia Tigers, is giving a day off to starting pitchers by having a new pitcher take the mound. During the Tigers’ game against the Lions on June 4, rather than having Im Ki-yeong pitch, Kim had Jung Yong-woon play as starting pitcher instead - and they won the game.

Trey Hillman, manager of the SK Wyverns, is using the KBO registration and cancelation policy to secure rest for his players and motivate them to be more competitive.

“For a while, I don’t plan on giving pitchers a rest,” Yang Sang-moon, manager of the LG Twins, said. “But if it doesn’t rain, I am concerned about pitchers’ condition. If that’s the case, I’ll give them a rest by making changes to the rotation.”