The chaos of Korean modernity viewed through shamanism : Artist Park Chan-kyong looks at the modern role of traditional spiritualism

The chaos of Korean modernity viewed through shamanism : Artist Park Chan-kyong looks at the modern role of traditional spiritualism 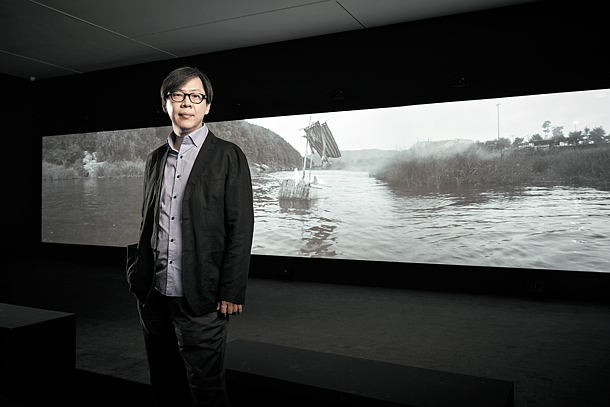 Visitors to the Kukje Gallery in central Seoul will encounter mysterious, beautiful objects hanging on the walls - a series of colored wooden panels on which are objects that look like carved brass dishes. The series of objects titled “Bright Starts” and “Seven Stars” are works by the famous Korean artist Park Chan-kyong, 52, and part of his first solo show in five years in Korea, titled “Farewell.”

“The brass objects are myeongdu, which are indispensable to mudang [Korean traditional shamans],” Park said in an interview with the Korea JoongAng Daily late last month. “With the object, mudang are said to commune with the deity or spirit they serve. Every mudang has one or more myeongdu and hangs it on the wall of the shrines or at the site of gut [mudang’s ritual].”

“With the sun, the moon and the Big Dipper stars carved on it, the myeongdu is a symbol of the universe - not as the great frontier that exists in modern science, but as the otherworld that existed in the minds of ancient people,” he continued. “I was interested in it so I created some kind of cosmic skyscapes by putting myeongdu on wooden panels.”

The reactions of viewers, when informed about myeongdu, are interesting. While some look closer with great curiosity, others step back frowning. Koreans generally have mixed and contradictory feelings about the country’s traditional shamanism called musok. It is related to history. The Confucian government of the Joseon dynasty (1392-1910) and then the regimes of modern Korea in the 20th century officially treated musok poorly, partly banning it and calling it a superstition. Still, musok has remained close to those on the margins, especially unprivileged people. And even some in elite society have secretly relied on it.

Park is well known for having recognized the importance of musok not only as folk religion but also as culture, lifestyle and even the reflections of archetypical ideas of the Korean working class and has explored musok’s relations with the turbulent modern history of Korea through video and film works such as “Sindoan”(2008) and “Manshin”(2014).

Those works originate from his questions about modern Korea’s unique sociopolitical conditions including the division of the Korean peninsula and about the identity of Korea, which was modernized under Japanese colonialism and then under the military regime with rapid economic development.

Park’s interest and questions are clearly visualized in “Citizen’s Forest,” the highlight of the ongoing solo exhibition at Kukje Gallery. The 26-minute three-channel black-and-white film is a horrific but beautiful visual poem full of metaphors and allegories with a certain narrative about “the countless nameless lives lost in the tragic chaos of Korea’s modernization” according to Kukje.

A scene from the “Citizen’s Forest” is viewed at Kukje Gallery. [KUKJE GALLERY]

In the unknown mountains are wandering the presumed victims of Korean history’s events such as the 1894 Donghak Peasant Revolt, the 1950-53 Korean War, the 1980 Gwangju Democratic Movement and the 2014 Sewol Ferry disaster, which the artist thinks is “a consequence utterly wrought by the limits of modernity we have yet to overcome.” Several judges, presumed to be the symbol of the authority and power against them, and a woman, presumed to be a shaman to console the souls of the victims and to lead them to the otherworld, also appear.

The film is roughly based on Korean gut, which was not only the ritual for the dead but also a performance and entertainment for those saddened by and tired of harsh reality. The audience, just like the viewers of gut, comes to participate in a ceremony to pray for peace of the souls and find their own catharsis.

Asked why the artist chose to name the work “Citizen’s Forest” and not People’s Forest, Park said, “It is a paradoxical title. The people whom this work intends to mourn are those who were unfairly excluded from citizenship.”

Also asked why the soldiers in silver skeleton masks in the film are half-naked without pants, he said, “They symbolize the aggressive and violent qualities of the male. But at the same time, they look shabby and ridiculous without pants. I intended this contradicting effect. They are threatening but pathetic at the same time.”

The work will be also shown at the Art Basel 2017, which opens today in Basel, Switzerland, as part of the prestigious art fair’s Unlimited sector.

“In fact, I came to take interest in musok and started the work ‘Sindoan’ [about a village of folk religion in Mount Gyeryong in South Chungcheong] in a way to find out what is the Korean aesthetics of the sublime” Park said. “I discovered a kind of sublime indeed, but it was not unique to just Korea. Rather it was universal to humankind… Instead, I found out some unique and interesting points of musok and gut, in which even all nameless and trivial spirits including mischievous spirits are fed with the ritual food and consoled like the guests invited to a party. I was fascinated by that.”

“And the living village people are also fed and entertained without discrimination in gut,” he continued. “In Korea, gut was a kind of village festival. It could be true that gut is actually for the living rather than dead and for praying for good fortunes, as some people say. But what is the problem? All religions have the quality of praying for good fortunes and gut is not for individuals’ selfish desires but for peace and happiness for everybody - both the living and dead.”

Peace and well-being is annyeong in Korean and it is also the Korean title of the exhibition. Annyeong is used to say both hello and goodbye.

Park first became known as an art critic in the 1990s and launched his career as an artist in earnest with the “Black Box: Memory of the Cold War Images” exhibition at the Kumho Museum of Art in Seoul. He was awarded the Hermes Korea Art Award in 2004, and the Golden Bear for Best Short Film at the Berlin International Film Festival in 2011 for “Night Fishing”, which he co-directed with Park Chan-wook, his elder brother and film director famous for “Oldboy”(2004) and “The Handmaiden”(2016).

Another film project of Park’s that he created with his elder brother under the name of PARKing CHANce is now on view at the Seoul Museum of Art(SeMA) in central Seoul as part of “Highlight,” an exhibition of the works from the collection of the French luxury brand Cartier’s foundation for contemporary art. The 18-minute 3-D film with immersive 3-D audio, filmed at the former set of the elder Park’s 2005 hit film “Joint Security Area” in Namyangju, Gyeonggi, compares and mixes the situations of the past and of the present.

The film can be said to be about the wandering spirits and the division of the Korean peninsula, which has been the persistent interest of Park Chan-kyong.

The exhibition “Farewell” runs through July 2. Admission is free. Go to Anguk Station, line No. 3, exit 1 and walk for 10 minutes.