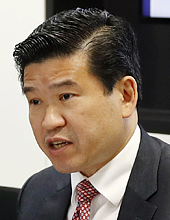 The American Chamber of Commerce in Korea suggested that President Moon Jae-in create a $10 billion fund for purchasing U.S. products on his first summit later this month with U.S. President Donald Trump, in order to cast a positive light on the Korea-U.S. Free Trade Agreement.

“The Korean government procures a lot of products from overseas. If it’s a purchase that has to be made anyway, our suggestion is to redirect the source of products worth $10 billion to the U.S.,” said former Amcham Chairman Jeffrey Jones in a media briefing held Wednesday at the IFC Seoul in Yeouido, western Seoul. “This will be an expression of commitment to purchase American-made goods.”

The United States’ manufacturing trade deficit with Korea has been a key factor that led Trump to label the Korus FTA a “one-way street” that is disadvantageous for the United States.

The fund was one of the provisions Amcham recommended Moon address during his meeting with Trump, scheduled at the end of this month.

“We have a very important visit by President Moon to Washington, D.C. coming up and all of us are hoping for positive developments and progress,” said Amcham Chair James Kim.

Suggestions on the list were mainly by Amcham but revised and complemented after the delegation met with White House officials and congressional leaders during Amcham’s annual Doorknock visit to Washington, D.C. last month. The proposals will be delivered to the Blue House through a meeting in the near future. Amcham said the official date has yet to be fixed.

Other suggestions include resolving non-implementation issues of Korus FTA, mentioned in the National Trade Estimate report by the U.S. Trade Representative, within the next 10 to 12 months.

“Several of Korea’s unique standards make it very difficult to implement the text and the terms of the Korus FTA because they are overarching regulatory agreements that apply to all industries in Korea that basically override many of the provisions of the [Korus FTA] agreement,” said David Ruch, Amcham’s former chairman. He added that the shortfall in compliance due to these non-tariff barriers was a factor that led the Trump administration to question Korus FTA’s value.

Every year, a Amcham delegation, comprised of executives from Korean companies and the local offices of foreign firms, meet with White House officials and congressional leaders to discuss policies and issues surrounding the two countries’ economic partnership.

Throughout the four-day trip, Amcham delegates participated in more than 50 meetings with leaders from the U.S. administration, including Peter Navarro, head of the White House National Trade Council and a core trade adviser to Trump who has maintained a negative stance on U.S trade with Korea and China. This was Amcham’s first visit to the United States since the election of both presidents.