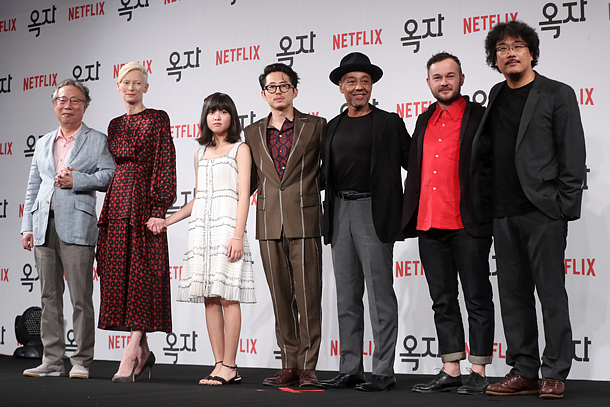 Ahead of the release of the Netflix-funded “Okja,” its director Bong Joon-ho, far right, and stars like Tilda Swinton, second from left, and An Seo-hyun, third from left, attended a press conference to discuss the movie. [YONHAP]

Auteur Bong Joon-ho’s Netflix-funded “Okja” has been creating controversies both within and outside of Korea ever since it was invited to compete at Cannes Film Festival last month. The film was criticized in Cannes for skipping a theatrical release and heading straight to Netflix, and a similar controversy erupted in Korea after the country’s major multiplexes - CJ CGV, Lotte Cinema and Megabox - have spoken out against Netflix’s decision to simultaneously open the movie in theaters and on the streaming site in Korea.

But despite all the controversy, its director believes there is a positive side to creating a new distribution order in the film industry.

“Though it was never intended, ‘Okja’ has caused controversies wherever it went, which resulted in creating new rules [in the film industry],” said Bong during a press conference held Wednesday at the Four Seasons Hotel in central Seoul.

“[Following the controversy surrounding ‘Okja’], Cannes has set new rules on how it will deal with Netflix movies (starting next year) though I believe the rules should have been set before inviting the films.” 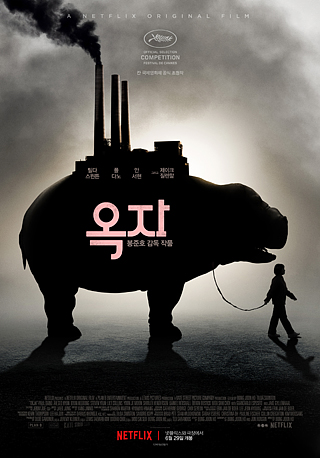 “Okja” will be released in Korea in theaters and on Netflix on June 29. [NETFLIX]

Bong further added that himself and Noah Baumbach (the director behind Netflix-funded “The Meyerowitz Stories,” which also competed at this year’s Cannes) are filmmakers who are preoccupied with making movies, and therefore, cannot afford to think about other issues like studying French law.

Bong continued, “I personally don’t understand why Cannes tries to apply French cinematic rules to the invited films, considering it is an international film event.”

The director expressed quite a different point of view on the film’s controversy in Korea and explained it was derived out of his “cinematic greed.”

“Things are a little different in Korea. I completely understand the position of multiplex cinemas wanting at least a three-week hold period [as they believe the simultaneous release of the movie disturbs film’s distribution structure]. I also respect the stance of Netflix, as the movie was made out of the subscription fees from Netflix users, and therefore, it wouldn’t be fair to make them wait for the sake of moviegoers.

“I believe I was the one that caused this problem, as I have repeatedly said while shooting the film that it would be great if it can also be screened on big screens… I think the problem is that the film arrived before local industries set their rules on the issue, but I hope ‘Okja’ can function as a movie that can set new rules and principles in the Korean film industry,” Bong said while also apologizing for the fuss the movie has caused.

Centering on the friendship of a girl from the countryside named Mija (An Seo-hyun) and her best friend - a super-pig named Okja - the movie unfolds as Mija tries to save Okja from being taken to Mirando Corporation, where it was originally created by tweaking a breed of Chilean pig to create super-sized animal for human pork consumption. Tilda Swinton plays the CEO of the multinational corporation while Jake Gyllenhaal plays a zealous yet devastated zoologist who supports the corporation.

The heartwarming tale is about growing up, according to Swinton, who was present at the press event along with co-stars Byun Hee-bong, An Seo-hyun, Steven Yeun, Giancarlo Esposito and Daniel Henshall.

So far “Okja” has been acquired by 70 cinemas in Korea, including Daehan Cinema and Cinecube in central Seoul. But the film’s theatrical release in major cinema chains, which account for more than 90 percent of the entire market, has not yet been decided. The movie will open via theaters and Netflix on June 29.