An Airbnb for parking spaces

An Airbnb for parking spaces 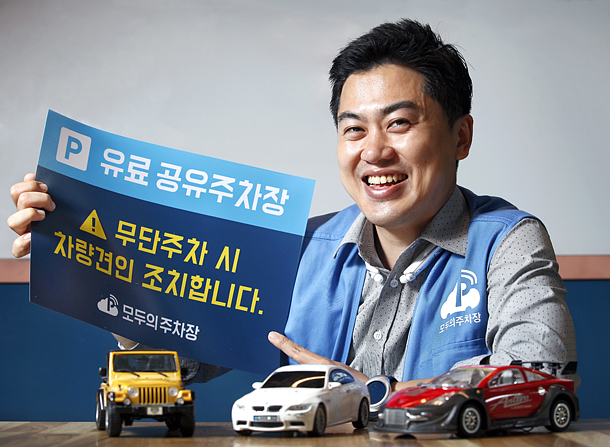 Kim Dong-hyun, CEO of Modu Company and founder of parking-lot sharing app Modu Parking, discusses the company’s service and the status of the sharing economy in Korea on Monday at his office in Jung District, central Seoul. [PARK SANG-MOON]

Modu Company is the start-up behind Modu Parking, an app that lets residents share their private parking lots a la Airbnb. Released in 2013, about 20,000 to 30,000 people rely on Modu Parking every day to find a spot among the 4,500 available on the app. The service lets people find a spot near them and pay directly through the app.

“It was quite stressful trying to find a parking spot in the middle of Seoul,” said Kim Dong-hyun, founder of Modu Parking. “We would look at an empty space and just park there knowing it’s illegal, but you know you are paying the price when you see that ticket.”

When he was working as a business consultant, Kim would often park his car for an hour or two to dash into meetings. One day, his car was nowhere to be found when he came out of a meeting with clients. His car had been towed, and he ended up paying a fine. The 38-year-old CEO said he would have parked the car in a paid lot had he known there was a spot available nearby.

So he decided to create a platform that provides the information. His vision was to ultimately resolve the issue of congestion caused by drivers looking for spots. Four years after the launch of his company, Modu Parking now has partnerships with several district offices in Seoul.

The following are excerpts from an interview with Kim at his office in central Seoul.

Q. What motivated you to start a business based on the sharing economy model?

A. My business partner [Kang Soo-nam] and I started preparations for the company in 2012. Back then, the concept of the sharing economy was not known in Korea. Koreans began discussing companies like Airbnb in 2013, so we didn’t start out with “sharing economy” as a keyword in our business strategy. Rather, we thought about how to resolve the parking issue, and approaching the problem through sharing seemed most ideal.

What are some difficulties your business has faced so far?

There are so many stakeholders involved - building owners, residents, local governments, law enforcement - and many regulations, too. Finding the middle ground and appealing to the government for a revision or enactment of regulations was the deal breaker, taking six months to a year each time.

What do you think the sharing economy really is, and how will it impact our lives?

I think we can look at the sharing economy as an exchange of willingness to provide and receive - the need to utilize something that may be sitting idle and the need to utilize something without buying. Many people in their 20s and 30s are concerned about efficiency. Creating a platform that connects multiple suppliers and multiple users can intensify competition and bring down prices.

What are some difficulties for the sharing economy in Korea?

Car sharing is about the only business model that has seen a certain level of success in Korea. When Koreans think about the sharing economy, they often think of it is a social service rather than a business model. Many companies with a sharing economy model have tasted failure because of this. These are all companies seeking profit, but Koreans tend to set a higher ethical bar for them. Some food delivery apps in Korea, for instance, have been in hot water for charging fees.

There is also the issue of the tragedy of the commons. Some “cherry pickers” consider sharing the same as being free. Such a view degrades the quality of service. It also often prevents other users from returning in the future. Resolving the issue of cherry picking is costly, more so than securing new users. This isn’t something that can be done by companies themselves. It requires social change and voluntary participation by all stakeholders.

What is your company’s vision for the future?

There are about three million cars registered in Seoul and about 3.3 million parking tickets issued each year. This shows illegal parking has become somewhat of a norm for us, and this has to change.

[Our partnerships with district offices] allow us to utilize the parking lots of private properties and apartment complexes. Such spaces take up 90 percent of all parking lots in Seoul, and we believe exploiting their possibilities can be the ultimate solution to resolving Seoul’s hectic parking conditions.