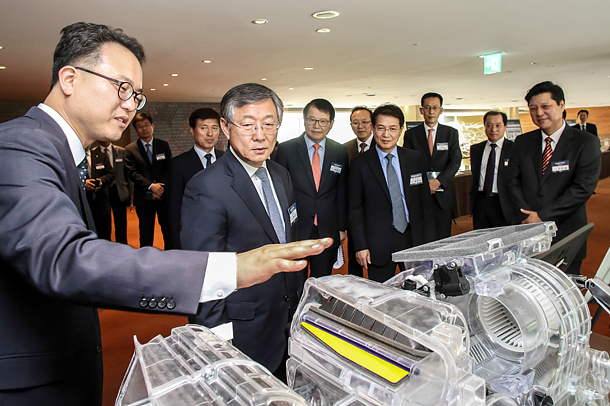 Korea’s top automotive company Hyundai Motor and its sister company Kia Motors discussed research and development with their suppliers on Tuesday, an effort to bolster cooperation with partners to develop future vehicles such as autonomous and eco-friendly cars.

Hyundai and Kia hosted Tech Day in Hwaseong, Gyeonggi, home of the automakers’ research center, with representatives from their 138 partners. During Tech Day, the automakers and subcontractors, most of whom are parts suppliers, showcased their latest breakthroughs in research and development. The company started the event in 2006 to “promote mutual growth,” said a spokesperson for Hyundai and Kia. While previously an annual event, Tech Day will be held twice this year to keep pace with the rapid changes in the automotive industry.

During Tuesday’s event, Hanon Systems, supplier and developer of automotive thermal and energy management systems, was recognized for its contribution to the development of Hyundai’s Ioniq electric vehicle. Hanon applied high-end energy management technologies to the air-conditioning and ventilation systems of the Ioniq, including high-efficiency heat pumps and smart air-intake systems, and helped Hyundai maximize the driving distance of its electric vehicle. Hanon’s heat-pump system reportedly re-channels refrigerant inside the pump. The system can help extend the driving distance of the electric vehicle as it uses the minimum amount of energy to cool off the vehicle without major change.

In 2017, Hyundai and Kia said they will deploy engineers to 62 of their partner companies.

“We must accelerate the development of competitive products and technologies in order to survive through the fierce competition in future-car development,” said Yang Woong-chul, vice chairman of Hyundai Motor, who added that on-site consulting will help realize that goal.