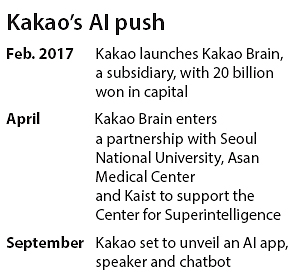 The hope is to have people interface with the app rather than simply use it as a conduit for communication. In May, Rim told analysts in a conference call that Kakao would release a voice-activated app that runs on artificial intelligence in July and an AI speaker by September.

The CEO’s rare public speech on Friday comes as Kakao has been making a noticeable push toward building its own AI ecosystem on the back of its popular KakaoTalk messaging app. The platform is not just used for chatting - it is also connected to the tech company’s host of on-demand services. Kakao Taxi can be used to grab a cab, Kakao Order to get food deliveries, Kakao Mart to order groceries and Kakao Style to shop for clothes.

The apps are part of the company’s initiative of the past several years to expand into on-demand services, but they have yet to post significant revenue or profit growth. Now, it’s taking a stab at AI. In February, the company spent 20 billion won ($17.8 million) to establish Kakao Brain, a subsidiary wholly devoted to research in artificial intelligence. One month later, Kakao set up a new business division to handle AI-related investment and technology.

In April, the company signed a partnership with the Korea Advanced Institute of Science and Technology, Seoul National University and Asan Medical Center to collaborate on research in core AI technologies, including medical image analysis and deep learning, where a machine performs functions without being explicitly programmed to do so.

In May, Kakao’s investment arm and Kakao Brain made a joint investment in SkelterLabs, a start-up that’s working on personalized services based on AI. The size of investment is unknown. The company also put 4 billion won into Luxrobo, a developer of hardware for robots, last week.

Kakao is somewhat playing catch-up in a race against other Korean tech companies to develop AI platforms. Samsung packaged its latest Galaxy S8 smartphone with a voice-activated personal assistant called Bixby. Mobile carriers SK Telecom and KT have voice-activated AI speakers Nugu and GiGA Genie out on the market. Naver last month debuted a beta version of its own AI assistant, Clova, which will serve as the basis for its AI speaker, Wave, scheduled for release this summer. Outside Korea, Apple on June 5 unveiled HomePod, its answer to the Amazon Echo speaker.

Rim says Kakao’s strength lies in KakaoTalk’s massive user base and trove of data. “Since we have 99 percent market share [with KakaoTalk], we are in a very good position to step into that way,” he said Friday, referring to artificial intelligence.

On upbeat prospects surrounding its AI business, Kakao shares have been soaring this year. The price has picked up 38.7 percent since the beginning of the year and ended Wednesday at 106,400 won. Brokerage houses have scrambled to raise the target price to as high as 130,000 won as Kakao is expected to see revenue growth during the remainder of the year.

“In the third quarter, Kakao is set to launch a targeting-based advertisement platform called Kakao Moment that will capitalize on the apps and services that KakaoTalk offers,” said Lee Chang-young, an analyst at Yuanta Securities. “The new platform is expected to help Kakao’s advertising revenue rebound.”