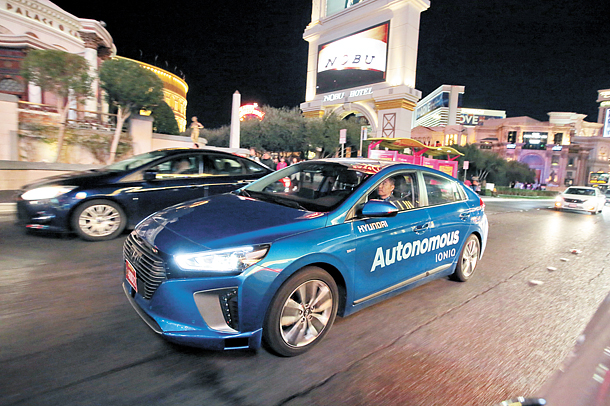 Hyundai Motor tests its self-driving Ioniq vehicle on the streets of downtown Las Vegas during the Consumer Electronics Show in January. [HYUNDAI MOTOR]

The present automotive market is full of uncertainties, and to overcome them, Hyundai Motor Group is strengthening its competitiveness in self-driving, connected-car and eco-friendly technology.

The group’s chairman, Chung Mong-koo, said as much during his New Year’s speech delivered earlier this year, where he stressed the need to stay ahead of the global competition and combat shrinking demand for cars by diversifying its technology and pursuing new sources of revenue.

One of these sources is autonomous vehicles. Hyundai Motor, as Korea’s largest automaker, is stepping up to the plate, ready to take the upper hand in this emerging field. The company showcased its self-driving technology at this year’s Consumer Electronics Show in Las Vegas and successfully demonstrated its new autonomous Ioniq sedan on the road.

The Ioniq is Hyundai’s hybrid-only model equipped with self-driving functions. While the exterior boasts the look of a conventional car, what makes the Ioniq stand out are its highly automated features. The vehicle has cutting-edge sensors and cameras that are fundamental elements for self-driving. The camera array offers full 360-degree coverage and can help drivers track lane markings, see whether traffic lights are red, yellow or green, and figure out what radar pings are pedestrians. There’s a Lidar detection system based on lasers and radar and a smart cruise control system with forward-facing radar sensors.

For navigation, the Ioniq is fitted with GPS antennas that can identify the precise position of surrounding vehicles and objects, allowing for navigation of roads even in crowded cities. Lidar sensors in the back, lane-keeping assist cameras on the windshield and detection radar for blind spots help facilitate lane changes. With driverless technology integrated seamlessly into the vehicle, the autonomous Ioniq can make the driving experience much safer.

Hyundai Motor has been aggressively pursuing autonomous car technology since first introducing self-driving features in the Tucson ix in 2010. Now, it has reached an advanced level of skill with the Ioniq sedan. The model has met Level 4 in the Society of Automotive Engineers’ self-driving criteria. Level 4 indicates “high automation” where a driver can let the car run by itself while only responding in extreme scenarios like heavy weather.

In Las Vegas, Hyundai Motor took the Ioniq out for a spin and tested the autonomous vehicle during the day and at night around the CES convention venue. The test was carried out on the street with all the interruptions of daily life, including cars weaving in and out of lanes. The Ioniq epitomizes Hyundai Motor’s achievements in autonomous vehicle development.

In addition to cars that can drive themselves, Hyundai Motor is also working on vehicles that do less harm to the environment. The automaker plans to expand its green car lineup and launch more than 10 new models each year concentrating on hybrids, plug-in hybrids and full-electric cars. The Ioniq will come in three distinct versions: hybrid, plug-in hybrid and full electric. The company believes the eco-friendly Ioniq will be a quintessential part of its future mobility strategy.

In 2014, Hyundai Motor and its affiliate Kia Motors presented a road map to improve the fuel efficiency of their cars by 25 percent and release over 28 eco-friendly models by 2020. With consumer interest in diesel-powered cars cooling down after the Volkswagen emissions scandal and citizens concerned about diesel cars emitting a great deal of nitrogen oxide, one of the main causes of fine-dust pollution, the automotive industry is undergoing a paradigm shift from internal-combustion vehicles to eco-friendly options, and Hyundai Motor Group, with its advanced technologies developed in-house, intends to ride that boom.

The group has been aggressively promoting the electric-car parts business as many automakers including Tesla have been expanding their lineup of hybrid and electric cars. For instance, Hyundai and Kia have announced plans to strengthen the country’s infrastructure for hydrogen-fueled, electric and eco-friendly cars by building hybrid charging stations.

Hyundai Motor Group is well prepared for the eco-friendly car era. It is ready to take on a leading role in eco-friendly car development and hopes to quickly usher a truly environmentally-friendly era with unprecedented eco-friendly vehicle-making technology.