Denuclearization of the North starts with a nuclear freeze

Denuclearization of the North starts with a nuclear freeze 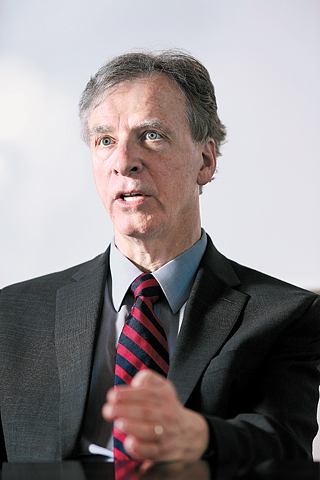 “This crisis is, of course, our third nuclear crisis with North Korea… we’re in the third where North Korea has an arsenal in the middle teens, a dozen to 15 weapons is an estimate in the open sources and this could go to, by 2020 to 100,” said Robert S. Litwak, a researcher at the Woodrow Wilson International Center for Scholars, a foreign policy think tank.

At 111 pages, the book is filled with evaluations on past crises with North Korea, critiques on present policies and details which options are available for the Trump administration, policy-wise.

Kim Young-hie, a senior columnist of the JoongAng Ilbo, had an interview on May 19 with Litwak, who came to South Korea with the invitation of Kyungnam University.

In the interview, Litwak repeatedly emphasized that “We are at an important turning point in this crisis.”

Q. The Trump administration’s direction on North Korean policy remains unclear. Though there does seem to be the will to denuclearize the North, right?

A. I think the Trump administration’s policy is still a work in progress. Now that he is president of the United States, he has to deal with relations with key allies especially South Korea and he sees the realities of the situation.

I think that given the urgency of the problem, and namely that North Korea is continuing to test ballistic missiles of longer range, it’s continuing to increase the number of warheads in its nuclear arsenal that we are at an important turning point in this crisis.

There’s a divide between the Korean and American understanding of the crisis. Koreans must live with the North’s nuclear weapons close at home, but on the other hand, the United States feels more sensitive to ICBMs as the ballistic missiles are capable of reaching the continental United States.

This crisis is, of course, our third nuclear crisis with North Korea, the third.

The first was the early 1990s over the Yonbyon facility when North Korea first gained access to plutonium from this research reactor that the Soviet Union had provided. That crisis led to the Agreed Framework of 1994, which was imperfect, but it froze the program at its current level.

In 2002, the second crisis occurred when the then Bush administration confronted the North Koreans on its cheating because of the covert Iranian enrichment program. North Korea had received centrifuges from A.Q. Khan in late the 1990s and they had this uranium enrichment program. And that led to the abrogation of the Agreed Framework.

Now we’re in the third, where North Korea has an arsenal in the middle teens, a dozen to 15 weapons is an estimate in the open sources, and this could go to, by 2020, to 100.

With long range ballistic missiles, and I know the question of range is not the major concern here, as you are all within the range of North Korea, but when the United States becomes vulnerable to a North Korean missile attack, that will change the politics in the United States and this urgency is the reason why I wrote this publication.

Here you have the North Korea threat being able to directly threaten the United States. If North Korea did not have nuclear weapons… we would not pay much attention to it.

What is the solution in these circumstances? Is there even a solution?

The bottom line of my proposal is that we should move towards serious diplomacy backed by serious pressure from China, particularly China because they’ve not done it up to now. To get the Kim regime to freeze its program at the current level, and that would be an interim step towards perhaps long term denuclearization.

The crux of the problem is if China will make moves.

It’s at the tipping point. We’re at a point where it’s about to get much worse and this creates a new reality not only for the United States but also for China.

The game-changer for the United States is this new strategic reality. It’s also a game changer for China because China can either continue to be an enabler of North Korea or it can either continue to not enforce sanctions and place meaningful pressure on the Kim regime to change its behavior or it can live with the strategic consequences of a breakout. And those consequences are hard to predict.

How does the United States view Kim Jong-un?

The United States has historically not responded well to vulnerability. and Kim Jong-un is such an erratic leader. If you looked at the American debate about Kim Jong-un, people often said he’s crazy, irrational.

I’ve been hesitant to use the word “crazy” or “irrational.” I think he has a rationality that we need to understand and the rationale of this regime is focused first and foremost on maintaining the regime in power.

Kim Jong-un, the grandson, is following the strategy of his father and grandfather of taking care of what North Korean analysts called the “court economy.”

These are the million people they need to stay in power and these are the people who are getting luxury goods, proper nutrition. They’re taking good care of them at the expense of the other people in the country. And in most countries this type of deprivation would lead to an uprising, some kind of revolution.

Can former President Obama’s handling of the Iran’s nuclear proliferation be a model for North Korean denuclearization?

The reason being that if we broadened the negotiations to incorporate everything, we would achieve nothing and we would not be able to attain a deal with the Iranians.

We could use that model with North Korea to focus on the discrete distinct separate nuclear issue and decouple it from the question of regime, the regime‘s human rights record, other behavior that North Korea has that we find objectionable.

How should the approach be and with what strategy for the North Korean issue?

There are two costs of just doing this type of nuclear diplomacy. The nuclear deal would focus just on the diplomacy and should just focus on the nuclear piece.

The first is that there’s a risk, I believe the term is a “moral hazard,” of propping up this regime… and if we did nuclear diplomacy, there’d have to be something for them.

The second cost would be that North Korea would be permitted for the time being to retain a small nuclear arsenal but 15 is better than 100.

Let’s assume there are two concentric circles. The largest and outer circle is US-China relations. The inner circle is the North’s nuclearization and the issues of the Korean Peninsula. But this outer circle, the United States and China stand in confrontation. Can the Korea question, can the nuclear question even be resolved unless there is a very close, sincere agreement between Washington and Beijing to stabilize the Korean Peninsula?

The China factor is new on the Korean issue. We had a former Wilson fellow, a distinguished Chinese academic, who wrote an op-ed that was permitted to be published, which made the case that North Korea has become a liability for China.

It was in a major daily newspaper and in that society, things just don’t happen. He was permitted to publish this piece in that newspaper and I think one can look at that as a signal that the North Korea question is being debated.

Now traditionally for North Korea, China, their concern has been that if the regime in North Korea collapses, that they would have refugees on the border and they would have a hostile united Korean state. I think there are things that we could do to address Chinese concerns.

How do we move China?

There must be things done to assure China that if there were to be unification, this unified state would not be a threat to China.
What we’re talking about here in this nuclear deal is basically an interim step to prevent a bad situation from getting worse.

What has appealed to China in this context is that for the time being it preserves the Kim regime as a buffer regime. They maintain their buffer and they avert the strategic consequences of a North Korean breakout.

Because in China they’ve got to consider the possibility that if North Korea builds a program up to this level that South Korea and Japan may well respond [with their own nuclear options].

What North Korea wants is normalization with the United States and a security assurance of non-aggression.

The first security assurance we can offer is a pledge of non-attack, non-aggression.

Isn’t it possible for the United States to put stronger pressure on China?

This is a subtle and complex process for China to apply pressure to the point that the regime is feeling consequences, real consequences for its actions, but it will not want to pressure so strongly that it will lead to regime collapse.

We need to, as they say in the State Department, to have a full and frank exchange of views with them on this issue so that they will recognize it’s not pressuring China, it’s asking China to recognize what their own interest is in this. That if they did this, it wouldn’t be because we pressured them.

If we don’t do it, and North Korea goes up to 100 [nuclear warheads], it would have adverse strategic consequences for China itself.

Must South Korea live under the persistent threat of a nuclear-armed North Korea?

We are where we are, that North Korea is not at zero [warheads], and it’s hard to see how they would get to zero while the Kim regime is in power.

But 15 is still better than 100 and some combination of arms control freeze program with a deterrent strategy with an engagement strategy is going to be a complicated exercise and we’re dealing with a very weak regime, in terms of its resources, but autocratic and powerful and able to maintain political control at home, with an arsenal that can threaten neighbors and powers far away.