Moon decides to push ahead with Kang Kyung-wha

Moon decides to push ahead with Kang Kyung-wha 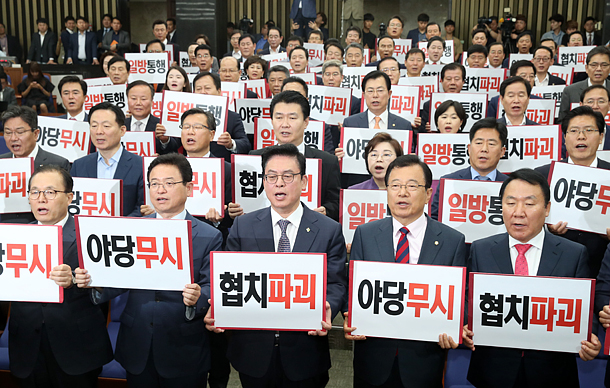 Lawmakers of the main opposition Liberty Korea Party denounce the Moon Jae-in government for not seeking the cooperation of opposition parties in confirmation hearings in the National Assembly Wednesday morning. [YONHAP]

Despite resistance by the opposition parties, the Blue House said Wednesday it will take necessary legal steps to formalize the appointment of Kang Kyung-wha, a senior UN diplomat, as the foreign minister.

“If the National Assembly does not endorse and send the report on the confirmation hearing, we will request them to send it,” a presidential aide said Wednesday, hinting that President Moon Jae-in will appoint her without the opposition lawmakers’ consent.

Moon has already bypassed opposition lawmakers on Tuesday and confirmed Kim Sang-jo, a longtime critic of conglomerates, as the head of the Fair Trade Commission.

The law governing the confirmation hearing process says the legislature must complete the confirmation process of a nominee within 20 days after it receives a request from the president. Approving and sending a hearing report is the final step, and the president has the right to give lawmakers up to 10 days to send it if they failed to do so. The report was due Wednesday. If the report is not sent before the deadline, the president has the power to make a formal appointment of a nominee.

“If the National Assembly does not send the report today, we can give them up to 10 days to send it,” the presidential aide said Wednesday. “The request is a matter of course.”

He said the president will not likely give the lawmakers all 10 days because of the urgency of the situation. “There are pressing diplomatic schedules due to the Korea-U.S. summit at the end of this month and the G-20 summit early next month,” he said. “Therefore, the deadline will be set earlier than the customary five days.”

Moon may give the legislature about three days to appoint Kang this week. The president is scheduled to leave for the United States on June 28 for a summit with his American counterpart Donald Trump. Even if Kang is appointed this weekend, she has less than 10 days to prepare for the trip.

The presidential summit will take place at the White House on June 29 and 30, Washington time. North Korea’s nuclear and missile programs, plans to develop the Korea-U.S. alliance and economic cooperative projects are part of the agenda, according to the Blue House.

Moon nominated Kang on May 21 to become the country’s first female foreign minister. If she is confirmed, she will also become the first non-career diplomat to head the ministry.

Scrutiny began even before the confirmation hearing started on June 7, and Kang was criticized for having used a fake address to help her daughter get into a better high school. She then apologized, as opposition parties vowed to block her appointment.

At the hearing, Kang was grilled on various issues, including her ability to handle sensitive diplomatic issues such as the North Korean nuclear crisis, the deployment of the U.S. Terminal High Altitude Area Defense antimissile system and the 2015 Korea-Japan “comfort women” settlement.

Due to the protests of the opposition Liberty Korea Party, People’s Party and Bareun Party, no report was created to express the lawmakers’ evaluations of Kang.

“We understand the confirmation hearing is a process the president uses as a reference to exercise his appointment right,” said Park Soo-hyun, presidential spokesman. “The people want to minimize the administrative vacuum. The opposition parties are still displeased about the appointment, but it was necessary and it was the best choice.”

As Moon prepares to push the appointment through, opposition parties warned of a catastrophe in the legislature. The ruling Democratic Party does not control a majority and opposition parties’ support is crucial to pass major bills, including a supplementary budget proposal to create jobs and a plan to restructure the government to create a new ministry for small and medium enterprises.

The main opposition Liberty Korea Party held a general assembly of its lawmakers in the morning. “Moon’s decision to go ahead and appoint Kang is an act of violence and a declaration to give up cooperative politics,” said Rep. Chung Woo-taik, floor leader and acting chairman of the party.

“If Moon appoints Kang, the situation is hopeless,” said Rep. Jeong Yong-ki, spokesman of the party. “We will resist using all possible means.”

The party also boycotted confirmation hearings earlier in the morning for Moon’s three other minister nominees. Last month, Moon named four ruling party lawmakers as ministers in an attempt to break a political impasse preventing him from forming his cabinet.

The People’s Party also warned that its cooperation with the administration will end. “If Moon appoints Kang, we will no longer play the role of cooperating with the ruling party,” said Rep. Park Joo-sun, acting chairman of the party. “If Kang is appointed, we will see it as the president’s decision to ignore cooperative politics and will not cooperate with us anymore.”