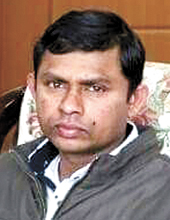 An illegal immigrant was named a civilian hero for the first time by the Ministry of Health and Welfare on Monday after saving a 90-year-old Korean woman from a fire at her house.

Katabilla Ketiye Ge-dara Nimal Siri Vandara, 38, from Sri Lanka, was working at an orchard in Gunwi County, North Gyeongsang, on Feb. 10, when he saw a house in the vicinity was on fire.

Running to the house, he found a Korean woman trapped inside. He ran in and carried the woman out of the house. She was not injured but Vandara sustained second-degree burns on his neck, wrists and head, and had to be hospitalized for a month.

“I jumped into the fire because she reminded me of my mother,” Vandara said. “I am working in Korea to pay for my mother’s medical bills back home.”

“One is Vandara, and another is Kim So-jung, a 22-year-old woman who heard a woman scream inside a building she was passing by in Gwangju, entered it and confronted a man raping a woman,” the ministry said in its statement on Monday. “In trying to stop the man from running away from the scene, she fell and damaged a ligament.”

Though the ministry has honored foreigners as civilian heroes before, it has never awarded the title to an illegal immigrant. The title is awarded to selected people who try to save another person from harm despite having no official duty to do so.

Under the Act on Honorable Treatment of and Support for Persons who Died or were Injured for Public Good, the Health Ministry provides varying amounts of medical aid depending on the severity of the injury or death, scaled from level one to nine. The ministry has awarded some 740 people from 1971, including two foreigners.

“The committee agreed to award Vandara, because regardless of his legal status, he has done something righteous outside his home country,” said Lee Sang-hee, head of the Division of Social Services Resources at the ministry. “Such conduct needs to be recognized by the Korean government, so we selected him as one of the civilian heroes.”

Vandara was awarded 10.45 million won ($9,293) from the ministry, which named him a level-nine civilian hero.

“Vandara paid for his medical bills because the ministry pays for the bills of civilian heroes of levels six through one,” said Kim Do-hyun, Vandara’s lawyer. “Vandara also faces a 10 million won fine for staying in the country illegally. We just applied for the G-1 visa issued to foreigners in need of medical treatment. So until that result comes, Vandara will be able to stay in Korea.

“The problem is all the medical bills he will need to pay now,” he added. “The company can’t pay for it because he wasn’t injured while at work.”

Vandara’s lungs show signs of pulmonary fibrosis, according to Kim.

Vandara came to Korea in September 2013 with an E-9 work visa and worked at an orchard during the day and at a factory at night. He earned some 1.8 million won ($1,600) a month and sent 1.5 million won home to his parents, he said.

LG Foundation also awarded Vandara a civilian hero title and 30 million won in March after learning that he had rescued a woman from the flames in her house. He is the first foreigner to win the title from the foundation.

“Vandara used up most of that money paying for medical bills and to cover his living costs as he couldn’t work since the fire incident,” Kim said. “We are asking the Ministry of Justice to lessen the amount of his fines.”