Son to undergo surgery for arm

Son to undergo surgery for arm 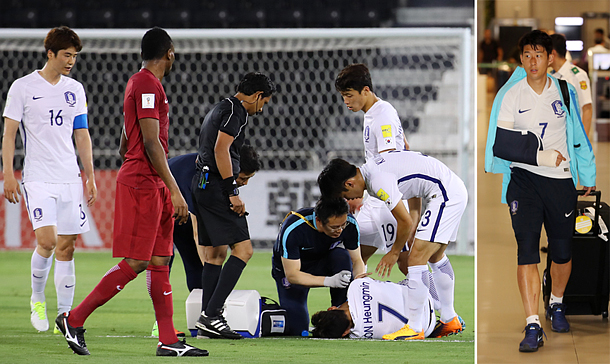 Left: Son Heung-min injures his right forearm during Korea’s game against Qatar in Doha on Tuesday. Right: Son returns to Incheon International Airport on Wednesday with a cast. [YONHAP]

Son Heung-min of Tottenham Hotspur will undergo surgery on his right arm, which he injured during the 2018 FIFA World Cup final qualification match against Qatar at Jassim Bin Hamad Stadium in Doha on Tuesday.

Shortly after Korea allowed the first goal to Qatar in the 25th minute, Son, playing as a left winger, fell on the ground and landed on his hand while competing for the ball with Mohammed Musa, Qatar’s defender. Son made an early exit from the match and Lee Keun-ho replaced him.

Arguably as a result, Korea lost 3-2 to Qatar.

After the match, the Korean national football team returned to Korea on Wednesday with Son wearing a cast. Quickly after his arrival, Son was taken to Kyung Hee University Medical Center.

“After medical examination, Son’s diagnostic test showed that he fractured his right radius,” said the Korea Football Association (KFA) on Thursday. “He will have surgery sometime this week and is expected to fully recover at least four weeks after.”

Since Son will have to undergo a surgery, it is unlikely he will join Tottenham Hotspur’s pre-season, scheduled to start on July 3. However, Son will be able to compete in the Korean national football team’s last two final 2018 FIFA World Cup qualification matches, against Iran at home on August 31 and an away match against Uzbekistan on September 5.

Son scored a goal during the team’s first match against Qatar at home to win the game in October, but since then, he hasn’t scored a goal in national team matches.

Son played in a total of 55 international matches for the senior national football team since 2010 and managed to score 17 goals.

In the English Premier League, Son scored a total of 21 goals, setting the single-season scoring record by an Asian player in the European league, and was awarded as EPL’s Player of the month twice in September and April.