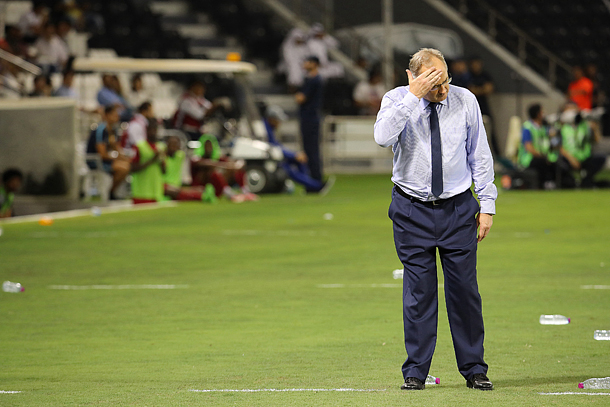 After the 3-2 loss against Qatar on Tuesday, the Korean Football Association decided to dismiss Uli Stielike from his position as head coach of the men’s national football team during its technical committee meeting at the National Football Center in Paju on Thursday.

Before the dismissal, Stielike was the longest-serving head coach of the Korean national football team, holding the post for 2 years and nine months, but as the team failed to perform in the final qualification matches for the 2018 FIFA World Cup, the KFA decided to end Stielike’s tenure.

“In mutual consent with head coach Uli Stielike, we will terminate the contract,” Lee Yong-soo, KFA’s head technical director, said during the press conference held after the meeting on Thursday. “And we notified Stielike about this before the press conference and he accepted the decision.”

Looking at the team’s performance throughout the final qualification matches, it was only a matter of time before Stielike would step down. The team is currently ranked second in Group A with four wins, one tie and three losses, at 13 points. Though being second in the standing means it makes the cut for an automatic berth into the World Cup, Korea has been struggling to perform against one of the weaker teams in the group, and their remaining matches will be against the first and third ranked teams.

Korea has recorded one win, one tie and two losses this year. Not being able to earn a single win in away games has been pointed out as Korea’s biggest problem. And their match against Qatar was a disaster.

Once the team returned from Qatar, Stielike stated that he will take responsibility for Korea’s loss but made it clear that he had no intention of voluntarily resigning.

Unlike Stielike, Lee showed an intention to voluntarily resign as he felt that he didn’t meet up to expectations as head technical director and because he was the one to hire Stielike. As for the next possible head technical director, Kim Hak-bum, former Seongnam FC head coach, Ahn Ik-soo, former head coach of the Korean U-20 national football team, Hong Myung-bo, former Hangzhou Greentown head coach and many others were mentioned. Stielike will still be receiving the rest of his salary - 1.7 billion won ($1.5 million).

“Since the contract mentions that Stielike’s contract will automatically end only if Korea gets eliminated from group qualification and Korea is still ranked second in the group with two matches remaining, the option of automatic conclusion does not apply,” said a KFA associate.

That said, because KFA was the one to end the contract, they are responsible for paying the remainder of Stielike’s salary.

The next head coach will be chosen by the new technical committee head - Huh Jeong-moo, vice president of the KFA, and Chung Hae-soung have been mentioned as possible candidates. With two final qualification matches remaining, Korea will have to find a new head coach to help it qualify for its ninth entry into the FIFA World Cup.

If Korea ends up finishing third in the group, they will have to play the third-ranked teams from the other groups, as only the top two teams will be given another shot at the World Cup in Russia at 2018.