Tell it to us straight

Tell it to us straight 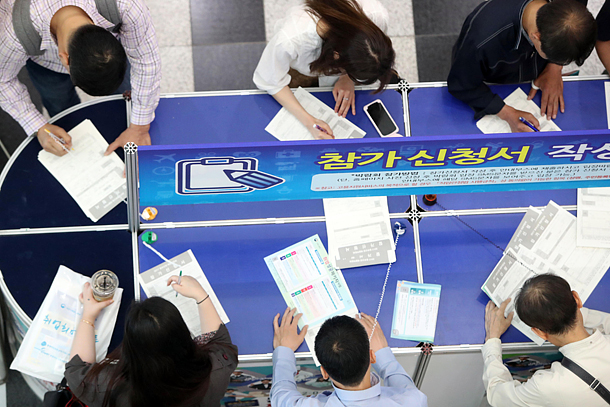 Job seekers fill out application forms at a job fair held in Bexco in Busan on June 8. [YONHAP]

President Moon Jae-in’s first address to the National Assembly could not have been better in theory and rhetoric. Citing the case of a young man searching in vain for a job could not have been a better example. The young man juggling between jobs and outsized credit card debt confessed to his parents that he should have studied harder. The president has hit the nail on the head.

Moon’s first address to the National Assembly proved why his approval rate hovered over 80 percent after just 34 days in office. He was speedy in action and his promises had a convincing ring. He did not merely sell his supplementary budget bill, he told a story based on social and economic developments. He did not use ambiguous words. He had a PowerPoint display to back his logic. He was different from the phlegmatic and ceremonial tone of former President Park Geun-hye.

This does not bode well for the opposition. It is hard to contest obvious data. They will not win if they resort to their old contentious ways. It is also difficult for three opposition parties to find a common voice of protest. The confirmation of controversial nominees, as well as the supplementary budget, would pass regardless of their opposition as they do not have a fighting chance against this enormously popular president. Yet there are a few points that must be said about the president’s pledges, made at the address, about creating jobs in the public sector.

First of all, the president has gotten the target number of creating 810,000 public-sector jobs wrong. His rationale as a candidate was that public-sector jobs made up just 7.6 percent of the total available work and fell far short of the 21.3 percent average of members of the Organization for Economic Cooperation and Development. His aim was to bump the number up to the OECD average. That would be 3 percentage points, or in actual figures, 810,000 jobs.

But he is misled about the comparative figure. Job data differs by country. The OECD data refer to the statistics from the International Labor Organization, while we use data compiled by the home ministry. According to the latest data compiled by Korea Statistics at the order of the previous government, public-sector jobs took up 8.9 percent of the total workforce. When including teachers, soldiers and medical professionals, the ratio would hit 13 to 15 percent. The share of public-sector jobs already exceeds the OECD average. Moreover, the share of annual pay for government employees makes up 21 percent of government expenditures, near the OECD average of 23 percent.

The cost of an additional 170,000 jobs in the government sector was estimated by the campaign team to be 21 trillion won ($18.7 billion) over the next five years. But a government employee on average works for 30 to 40 years. The opposition camp believes the increase in government jobs would cost 200 trillion to 300 trillion won over the next 30 years. This is why it opposes the supplementary budget proposal, which includes spending for additional jobs in the public sector.

There are no free lunches in the economy. The bill to increase jobs in the public sector that are secured for life would go to taxpayers. The president has been playing the role of Santa Claus. He vowed to eliminate irregular work, raise the minimum wage and shorten working hours. All this costs money. His campaign agenda would cost around 178 trillion won. A tax hike is the only way to finance the cost.

Still, if the president wants it, he should have the courage to say so. He should say where the tax funds would come from. The previous government, by insisting on stronger welfare without tax increases, ended in failure in terms of its welfare policy. The president enjoys an approval rating of 80 percent. There would be plenty who would be willing to support the president if he proves to be convincing in his plan to increase hiring.