Korea’s Ministry of Strategy and Finance and the Asian Infrastructure Investment Bank (AIIB) will hold the bank’s second annual meeting on Jeju Island from today through Sunday.

According to the Finance Ministry, about 2,000 people will attend the meeting, including AIIB President Jin Liqun and representatives from 77 member states, heads of international organizations and financial institutions, along with the media. 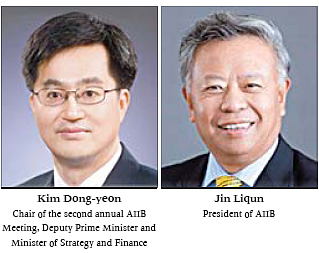 The AIIB is seen as a new financial institution to rival the World Bank and the Asian Development Bank, which are dominated by western countries and Japan, with the aim to create a financial order centered on Asia and developing countries.

“Korea is a very important member of AIIB and its economic development achieved in the past 50 years is a good model to the region,” Danny Alexander, Vice President at the AIIB, was quoted as saying to a local media outlet earlier this year. “Korea has the second most number of employees working for AIIB, following China, and I believe Korea is taking an important role at the bank just by looking at the country hosting the second annual event.”

This year’s main theme is Sustainable Infrastructure and governors and officials at the AIIB will discuss ways to efficiently run banks.

“This will be the first international event that Korea will hold after the new administration was launched,” said Lee Joon-bum, a director at the Finance Ministry. “We believe the event will be an opportunity for us to present our economic policies to the world, while strengthening economic and development ties with major countries.”

Finance Minister Kim Dong-yeon, who will be chair of the second annual event, will give opening remarks on Friday. This will be his debut as Korea’s economic chief for the global event.

From left: Founding countries signed articles of agreement for the creation of the AIIB in Beijing, June 2015. The opening ceremony of AIIB launched in Beijing on Jan. 16, 2016. MOU signing day between the AIIB Vice President Danny Alexander, left, and then-First Vice Minister of Finance Choi Sang-mok in Seoul in February. [XINHUA, MINISTRY OF STRATEGY AND FINANCE]

The Korean ministry is hoping that the annual event will be a chance for Korean companies to expand their businesses in Asia.

“We have planned various events to help Korean companies enter the Asian infrastructure market such as forums on investments, one on one business meetings and seminars where companies can take the time to introduce their businesses,” said Lee. “We expect the event will allow Korean companies to have time to network and share information with AIIB and member states.”

Samsung C&T, which will unveil its high-end technologies on infrastructure including high rises, has been involved in many projects in several countries. Last year the Samsung affiliate won a $610 million contract to build the Thomson Line T313 subway station in Singapore, the latest in a long line of projects the company has undertaken in the island nation.

Doosan Heavy Industries & Construction also has been participating in the projects in over 40 countries over 50 years. Doosan said it has the best technologies on seawater desalination in the world and has become a global leader in the power plant field.

Hyundai Motor also will provide 110 vehicles, including 100 Ioniq EVs, for use by VIPs and senior officials. The automaker said it will be meaningful to introduce its environmentally friendly model as green energy will be one of the topics discussed at the event.

“We think it is very meaningful to provide vehicles for the event that will discuss sustainable infrastructure and help emerging countries to develop further,” Hyundai Motor Vice President Park Kwang-sik said. “We will give full support to have the event become successful.”

Meanwhile, the Korean government will take the opportunity of hosting the event to educate visitors on Korean culture, including K-pop and Korean traditional foods.

According to the Finance Ministry, girl group AOA, which is popular across Asia, will perform at the welcoming dinner hosted by Deputy Prime Minister Kim Dong-yeon on Friday. On the second night, Lyn who sang the official soundtrack of popular dramas such as “Descendants of the Sun” and “My Love From the Star” will perform at the dinner.

“There were many people who showed interest in attending the annual event from Asian countries, especially from China, Hong Kong, Malaysia and Singapore, after we announced the K-pop stars’ scheduled performances,” said Cho Yoon-ku, a director at the Finance Ministry.

The ministry has designated Saturday as Korean Food Day and will offer traditional foods to attendees. On Sunday, the Korean government will give free tours of Jeju island.

In late April Korea Water Resources Corp. (K-water) was awarded an $8.7 million loan from the AIIB to build a hydropower plant construction project in the Caucasus region of Georgia. The $1 billion project will build a 280-megawatt hydroelectric plant along the Nenskra river.

It is the first case in which the China-led infrastructure bank approved a Korean project.

Other Korean firms reportedly have applied for financing for major projects from the AIIB.