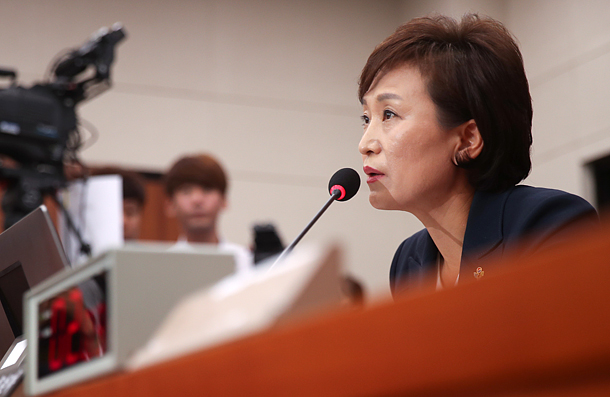 Previous governments “have excessively released money in trying to raise the housing economy,” Kim said during her confirmation hearing at the National Assembly on Thursday. The policies “may have contributed to raising economic growth but unfortunately failed to lead to policies in stabilizing the housing market.”

She said there is a need to consider various policies including regulating loans that would be applied according to the region’s situation that wouldn’t have a major impact on those who are hoping to buy apartments to live in.

During the hearing she reaffirmed her intention to crack down on speculative investments, particularly those centered on reconstruction projects in Gangnam believed to be the driving force behind the recent hike in the real estate market.

“While there’s an abundance of floating capital in the market, those that have been waiting on the sideline surfaced after the election and were mixed with the speculative investments,” Kim said on the recent hype in the real estate market.

The nominee has been pointing to the previous government’s move to ease loan regulations, namely the Loan-to-Value (LTV) and Debt-to-Income (DTI), as reasons household debt has been breaking all-time records and imposing a threat to the economy.

Korea is the world’s third-fastest country by household debt growth, according to a recent report by the Bank for International Settlement, following Norway and China.

Kim said the most ideal policy would be stringent on illegal transactions and speculative forces while raising housing stability, especially for low-income families, young people and newlyweds.

She said when tightening the regulations like LTV and DTI ratios, the moves will be targeted accordingly to the region’s real estate market instead of applying a general rule as a whole so that actual buyers in need wouldn’t be affected.

“The housing market should be changed so that it is centered on actual demands [people who purchases apartment for the purpose of living and not as an investment] and in the larger frame there’s a need to control the phenomenon where housing prices surged without specific reasons,” Kim said.

As the Moon Jae-in administration has been focused on reigning in the recent hype in the real estate market, the Korea Housing Institute in a report released on Thursday projected the price of housing units in the second half will likely see a significant drop in its growth. The institute estimated the value of houses will only inch up 0.2 percent while jeonse, or long-term deposit rent, will remain unchanged.

The report noted that the market showed recovery in the first quarter after the political uncertainty caused by the impeachment of Park Geun-hye was followed by President Moon Jae-in winning the election. The institute noted that the rural areas, excluding greater Seoul and several major cities like Busan, will likely see values drop.

“[The government] will need to keep a stable policy approach while come up with policies that meets the regional situations,” said Kim Deok-rae, head of the housing policy department at the Korea Housing Institute.

During the hearing the Land Minister nominee, like several colleagues before her, faced tough questions from lawmakers, amid rising tensions between the ruling and opposition parties.

The hearing for the first woman to be nominated as Land Minister comes while opposition parties have strongly protested to President Moon’s decision to proceed with the confirmation of controversial civic-activist Kim Sang-jo to head the Fair Trade Commission earlier this week. While several of the minister nominees including Finance Minister Kim Dong-yeon have passed the National Assembly without much effort, others like Kim Sang-jo and Kang Kyung-wha, who is nominated as foreign minister, have been receiving strong resistance.

Land minister nominee Kim was grilled over several allegations, including plagiarizing her graduate thesis, tax evasion and real estate speculation, all of which are considered to be disqualifying factors. Also her lack of expertise in land, transport and infrastructure was a key issue that was brought up during the hearing.

FTC Chairman Kim was accused of several acts, including real estate speculation and falsification of a residential address.

The land minister nominee denied the allegations. She said her graduate school thesis had many mistakes, as it was her first. But she stressed that though the quality of the thesis may not be good, she did not copy other works. She also has been criticized for lack of expertise. Kim, a Democratic lawmaker, has served on the National Assembly’s Strategy and Finance Committee but never on the Land, Infrastructure and Transport Committee.