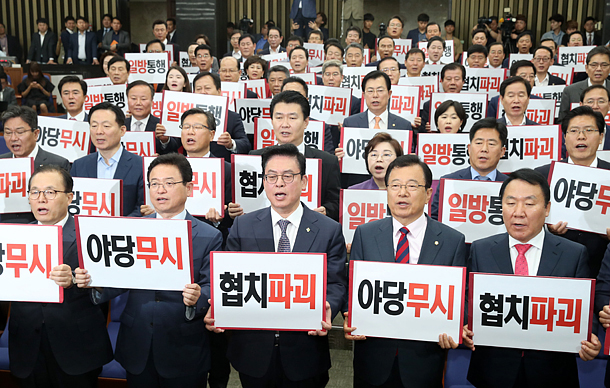 In 1997, President Kim Dae-jung successfully won the presidency through a coalition with Kim Jong-pil, and he invested his all for political independence in the general election in 2000. As civil groups unfolded anti-election campaigns for Kim Jong-pil, he severed ties with him and announced the inter-Korean summit three days before the election.

However, when votes were cast and tallied, his Millennium Democratic Party won 115 seats, and the Grand National Party led by Lee Hoi-chang won 133 seats, close to the majority of the 273-seat National Assembly. After the general election, an aide cheered him up, “Now that Lee Hoi-chang is also responsible for state administration, he won’t be opposing all the time.” Then Kim rebuked him, “You don’t see the situation straight.”

Kim Dae-jung was a realist and didn’t expect the “good will” of the opposition party. Without having a majority, he thought that the Blue House would be powerless. A month after the general election, President Kim named Lee Han-dong the prime minister and restored the alliance with the 17-seat United Liberal Democrats (ULD). Two ministerial positions were allotted for the ULD, and by the end of the year, he even arranged an unprecedented “lending” of lawmakers to make the United Liberal Democrat a negotiation body in the assembly. President Kim did all he could to take the lead in the National Assembly.

The confirmation hearings for the minister nominees of President Moon Jae-in are stalled as the ruling party does not hold majority in the legislature. Three opposition parties are blocking the supplementary budget plan and the government organization act revision. More obstacles are ahead. There are many laws to be revised to address the faults of the conservative administration of the past nine years, but all need to be approved by the three opposition parties. The budget cannot be passed without their support.

What solutions does President Moon Jae-in have? Considering the latest Thaad controversy and re-inspection on the Four Rivers project, President Moon is determined to draw a line from the conservative Liberty Korea Party and Bareun Party. He doesn’t seem to be willing to join with the People’s Party either.

President Kim Dae-jung would have tried to appoint People’s Party members to ministerial positions to secure a stable majority. Roh Tae-woo would have pursued merging with People’s Party and Bareun Party. It is unclear how President Moon would overcome the big opposition presence. With such a high approval rating, he may think the opposition would have to follow in the end.

But the Democratic Party successfully proved that opposition party would recover power after a defeat in the presidential election. Pressuring the opposition through public opinion is limited. There is no guarantee that his approval rating will continue to soar.

The next general election is just three years away. Without a structural plan to take a majority in the National Assembly, the power of President Moon could be a house of cards.