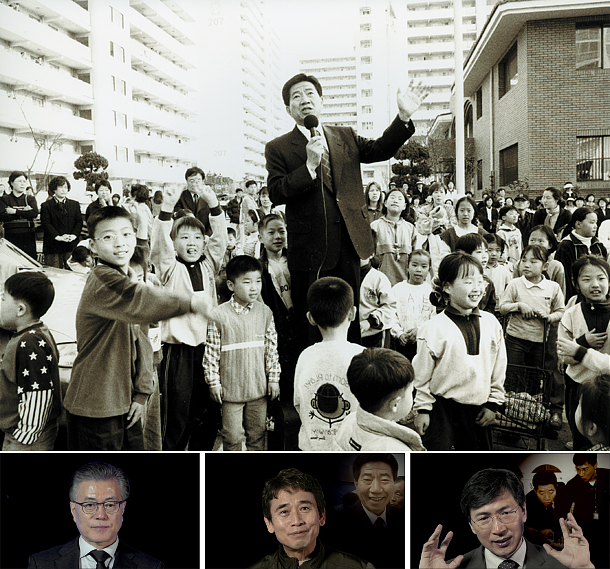 Top: Late president Roh Moo-hyun campaigns in Busan ahead of the 2000 general election; Above: From left to right are President Moon Jae-in, politician-turned-writer Rhyu Si-min and South Chungcheong Gov. An Hee-jung, who appear in “Our President” to share their memories of Roh. [ROH MOO-HYUN FOUNDATION, CGV ARTHOUSE]

When reporters were each handed a box of tissues ahead of entering a press preview last month for “Our President,” it seemed obvious what kind of documentary it would be: a tear-jerker that highlights the successes and mourns the death of late president Roh Moo-hyun.

That turned out to be the case, as the audience, both young and old, was heard sniffling throughout the 109-minute screening while being reminded of what kind of person Roh was and what he did.

“I came to watch the documentary with my boyfriend and his parents,” said a 24-year-old viewer surnamed Hur after a recent screening of the film. “Though I was only an elementary student [when Roh took office], and therefore, don’t have much memory of him, seeing Roh appealing to people with his humanity to win political battles and ultimately become the president made me very emotional.

“I was able to see a number of middle-aged women who seemed to be based in Jeolla, [the stronghold for liberals], crying even after the screening. My boyfriend’s mother was one of them.”

When the filmmakers of “Our President” first devised the idea of making a documentary out of the late president, who committed suicide in May 2009, they had never imagined it would garner such attention. Director Lee Chang-jae and producer Choe Nak-yong had hoped for the film to be screened at few small theaters at best and thought about spreading the video online.

But, when the documentary opened in theaters on May 25, it sold 78,800 tickets on its first day, and ranked second at the box office. The film broke even after it reached a total of 200,000 tickets sold in just three days, and became the first documentary to sell one million tickets in 10 days in Korea.

The speed in which the film reached the million-ticket mark was a lot faster than the most commercially successful documentary ever, “My Love, Don’t Cross That River”(2014), which took 18 days to do the same. It went on to sell 4.8 million tickets.

“Our President” has managed to stay in theaters even amid the inflow of summer blockbusters like “Pirates of the Caribbean: Dead Men Tell No Tales” and “Warriors of the Dawn.”

The film focuses on the miracle of Roh winning the Millennium Democratic Party’s primary in 2002, when he unexpectedly defeated frontrunner Rhee In-je. Featuring some 40 interviews with people such as President Moon Jae-in, who served as Roh’s senior presidential secretary for civil affairs, South Chungcheong Gov. An Hee-jung and politician-turned-writer Rhyu Si-min, the documentary depicts what kind of a person, not politician, Roh was.

There are external and internal factors to the film’s success, according to culture critic Hwang Jin-mi.

“An external reason for its success is that the administration has changed [from conservative to liberal], and that many people are imagining how things might have been different if [the liberal party] had not lost the administration [after Roh]. Missing the Roh administration and the sorrow, sympathy and guilt people feel after having let him go so tragically are part of the motivations behind driving audiences to watch the movie. It is their way of mourning his death. Even those who did not support him are choosing to get to know him through the documentary amid the inauguration of the new government,” Hwang said.

Hwang further explained that the documentary’s depiction of Roh’s most dramatic political period is another reason that makes people flock to theaters.

“The story is very similar to a hero narrative. [Roh] was a weak political figure who chose to overcome regionalism even at the cost of sacrificing his career. And there appears a despicable villain (political rivals), frustrating Roh’s [political goals]. But boosted by those yearning for democracy, Roh miraculously wins the primary to eventually become the president.

“It gives a sense of thrill. It’s like watching sports,” said Hwang.

“People feel guilty about not having been able to protect Roh, and many hope to feel consoled by watching the movie,” Oh said and added, “When a documentary matches the public sentiment, it receives an explosive response, which is the case of ‘Our President’ amid the [impeachment of conservative leader Park Geun-hye] and the inauguration of the Moon Jae-in administration.”

However, some point out that the documentary only deals with the positive aspects of Roh, excluding the political turmoil he encountered, such as his sudden drop in approval ratings and being impeached by the National Assembly after he took office.

“The documentary does not include what happened during Roh’s presidential term and why he encountered the tragic end of life, which is what we need to start looking into [so as not to repeat the same mistake with the new administration],” said Hwang, who agreed that the film is emotionally biased.

The documentary has sold a total of 1.62 million tickets as of Wednesday.