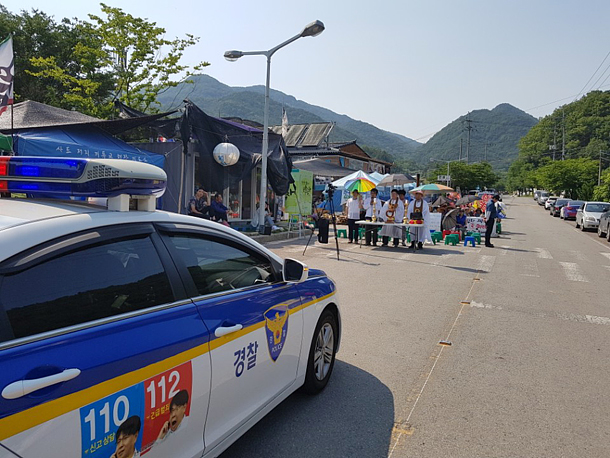 Residents and protesters against the deployment of the U.S.-led Thaad system have been stationed by the road in Soseong-ri in Chojeon-myeon, Seongju, stopping vehicles and inspecting them to check if they are carrying Thaad-related equipment. [YONHAP]

Tensions are surging between police and residents of Seongju County, North Gyeongsang, who have been on edge since the furtive delivery of key components of the Terminal High Altitude Area Defense (Thaad) battery to their neighborhood golf course.

Residents and protesters against the deployment of the U.S. Thaad system have been stationed by the road in Soseong-ri in Chojeon-myeon, Seongju, leading toward the golf course around two kilometers (1.2 miles) away, stopping vehicles and inspecting them to check if they are carrying Thaad-related equipment, guarding against anymore secretive delivery of antimissile battery parts.

Police in turn declared on Wednesday that such acts were illegal and that it planned to tear down the checkpoint and remove personnel running them.

Following the police declaration that it will halt the illegal inspection of vehicles, locals and Won Buddhists who have protested the Thaad deployment rallied in front of the Soseong-ri town hall Thursday.

Some 50 locals in turn set up plastic chairs and stood their ground. Around 200 police officers in five buses were stationed in a parking center near the town’s health center on standby Thursday afternoon.

Seongju police broadcasted to the townspeople, “Remove all the tables and parasols on the road. It’s a violation of the road traffic law!” It added that they will forcibly remove such items should the request not be abided by.

Police appear to have responded to recent media reports pointing out that the residents’ random inspection of vehicles passing their town was illegal.

Catching wind of the delivery, locals gathered at the Soseong-ri town center, near the Seongju golf course, while some 8,000 police were stationed in the rural town amid the stealthy deployment of the antimissile system in the dead of the night. This resulted in scuffles with local residents and the injury of some of the protesters.

These locals, since the secretive delivery of the Thaad parts by the U.S. Forces Korea, which came without proper environmental assessment procedures, have been inspecting select vehicles passing through their neighborhood heading toward the golf course. Through such inspections, residents in early May discovered barrels of gasoline being carried in a truck supposed to be delivering side dishes, which locals suspected was fuel for the Thaad generators.

Residents have also complained about the loud noise created by the Thaad generator.

Around two dozen villagers and 30 police officers confronted each other between two patrol cars as they tried to reach a consensus and avoid a clash Thursday afternoon.

Police said residents who block vehicles and randomly inspect their contents will face charges of violating the road traffic act and obstruction of business. It also demanded that they remove all their facilities set up on roads including tables and parasols.

A resident who is a part of a Soseong-ri activist group said, “While police have not physically carried out the act of removing our facilities set up on the road, we feel great pressure from their deploying personnel around the area. It’s not like we are armed with guns or knives, nor are we stopping all vehicles from passing through, but they are calling it illegal.”

“It is illegal for residents to inspect vehicles passing through the road,” a police officer said, but pointed out that it will be difficult to forcibly remove them, because this “could bring about a clash with the residents.”

There was a brief scuffle between police and residents Thursday evening as police attempted to remove tables and other obstructions from the road. The altercation ended in around 10 minutes and police withdrew their forces at around 7:15 p.m.