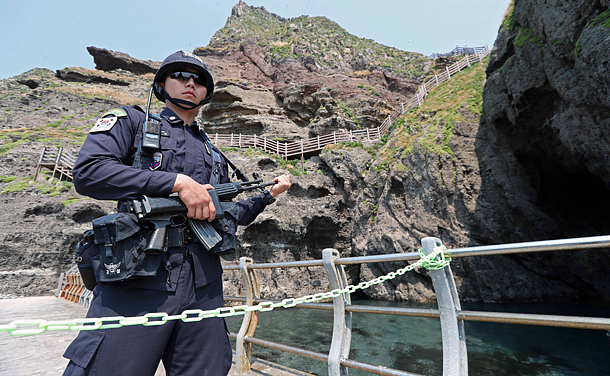 Dokdo guards stand on duty with arms on Thursday. The South Korean Navy announced Thursday that it will conduct a two-day exercise this week as part of efforts to defend the Dokdo islets from possible aggression by “outside forces.” [YONHAP]

Korea’s Navy announced Thursday that it will conduct a two-day exercise this week as part of efforts to defend the Dokdo islets from possible aggression by “outside forces,” the Navy said.

It was apparently referring to Japan, which claims sovereignty over the Seoul-controlled islets in the East Sea.

This week’s practice will involve a 3,200-ton Gwanggaeto the Great-class destroyer and six other ships of the Navy and the Coast Guard, plus four naval and Air Force aircraft, including an F-15K fighter jet and a P-3C Orion patrol plane. A unit of marines will also stage a landing drill on Dokdo.

“The training this time will be similar to previous ones in size,” a Navy official said.

The Dokdo defensive exercise is a regular event held twice a year since 1986, based on the scenario of an external threat. It will be the first since the launch of the Moon Jae-in administration. Japan has strongly protested the training. On Seoul’s reported plan for the drill, its Foreign Minister Fumio Kishida openly said in March, “It’s regrettable and unacceptable” in light of the Japanese government’s stance on the sovereignty over the islets.

In addition, Seoul and Tokyo have been at odds over a controversial deal on the issue of Japan’s sexual enslavement of Korean women during World War II.

Moon, a liberal leader who was a human rights lawyer, stressed that many Koreans still disapprove of the 2015 accord to settle the decades-old historic issue with Japan’s payment of 1 billion yen ($9 million) for dozens of victims who are still alive. Koreans believe Japan has yet to fully atone for its wartime atrocity.