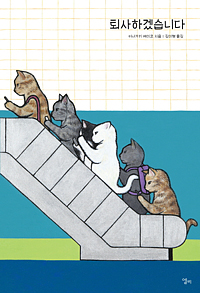 After reading the title of this column, do you wonder why I am writing my letter of resignation? Then, you must not know the title of the hottest book among people in their 30s.

The book title is bold. “I Quit My Job.” The Japanese title is “Desperate Resignation.” The author has desperately prepared to quit her job. Asahi Shimbun reporter Emiko Inagaki is 51-year-old single woman. Unusually for an Asian woman, she wears her hair in an afro. She quit the newspaper that she described as “a top workplace where employees hardly quit.”

While she was demoted for reasons she wasn’t convinced of and had troubles with coworkers, those weren’t the reasons why she quit her job. She didn’t resign in a rage. When she turned 40, she set a 10-year plan to leave the company. And when she turned 50 in 2016, she tendered her resignation.

The book is straightforward. She named Japan a “Corporate Society,” not unlike Korea, and the social system is employee-oriented. There, a jobless freelancer like her is a stranger.

However, she looks at the stars rather than watching television and bravely lives life, paying just 1,500 won ($1.32), not yen, for electricity per month. Rather than a rosy dream for life after resignation, she calmly describes a bit of suffering and great sense of liberation after becoming unemployed.

Japan’s NHK recently described her as a “life changer,” and Korean network SBS also discussed the “desperate resignation” phenomenon in detail. The young people today are the first post-liberation generation to be poorer than their parents’ generation, and they responded to the program. It had higher rating than the first part of “Running Man,” a popular variety show on the same network.

Why? It seems to address a different way of life is not wrong, which some people felt. A life of struggling because of the organization but living thanks to the organization is also admirable.

However, that is not the only way to live. Koreans in their 30s feel it, and Inagaki showed it in the name of “desperate resignation.” Coincidently, translated titles of Japanese essays popular among the readers in their 30s have something in common: “I Don’t Do My Best” by Sano Yoko, “Don’t Work Too Hard” by Jinnosuke Gokoroya and “Keeping a Distance” by Ayako Sono.

We already know what’s important in our lives: ourselves. While working hard, it is important not to lose ourselves.

The author is a P-Project Team reporter.