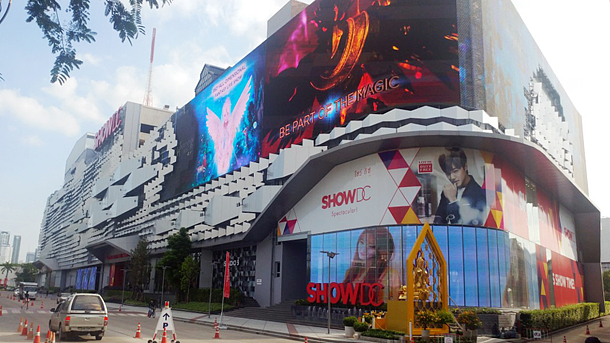 The Show DC shopping mall on Royal City Avenue in Bangkok. Established this year, the shopping and entertainment complex is the venue for Lotte’s seventh foreign branch, which opened Friday. [LOTTE DUTY FREE]

The advance comes as a move to compensate for its losses in domestic sales, which have been affected by the rapid decline of Chinese tourists to Korea after the deployment of the U.S. antimissile system known as Thaad.

On Friday, Lotte opened part of the store to the public, starting with the Thai zone on the third floor that consisted of 50 or so local brands. More sectors will open in the second half of this year.

The company said the more than 300 brands are reserved to open in the Thai branch, including some Korean firms.

Lotte’s Bangkok branch is on the second and third floors of the Show DC mall on Royal City Avenue and will span 9,354 square meters. It’s located 30 minutes away by car from the Suvarnabhumi International Airport. Commonly known as RCA for short, the neighborhood is a trendy downtown district flooded with clubs and bars, and is popular among young tourists for its nightlife.

Established this year, the shopping-and-entertainment complex is dedicated to Korean pop culture. Some of the eateries in the mall are owned by Korean celebrities including Psy and Rain.

With this concept in mind, Lotte organized a small exhibit on the mall’s ground floor dubbed “Star Avenue,” which consists of personal belongings of Hallyu stars and some of the clothing they wore on film sets.

Bangkok was the second most visited city in the world in 2015 and one of the cities most frequented by Chinese travelers. About 10 percent of Thailand’s GDP is generated from tourism.

For Lotte, the move is part of a larger strategy to strengthen its stance in the Southeast Asian market, where the company is also operating stores in Jakarta, Indonesia and at Vietnam’s Da Nang International Airport. The duty-free giant now has seven branches overseas, including in Japan and Guam.

Lotte Duty Free’s primary business focus in the past was Korea. Last year, Lotte led the domestic duty-free market with a share of nearly 50 percent. But the situation changed drastically in mid-March when China banned group tours to Korea in the aftermath of deploying Thaad. Sales from Chinese customers, which used to make up 70 percent of sales before the crisis, plummeted 40 percent year-on-year since April.

“The company is hoping that marketing our way into Southeast Asia will be a positive opportunity to enhance global competitiveness in a situation where our Korean business is facing difficulty from economic retaliations from Thaad,” the company said in a statement.