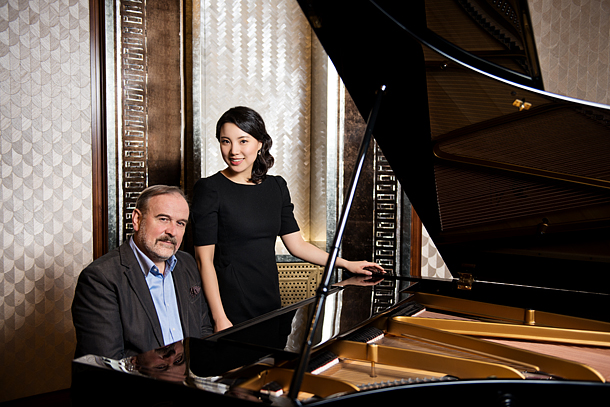 Soprano Sumi Hwang, right, and pianist Helmut Deutsch will perform together on Sunday at the Seoul Arts Center. [ARTS & ARTISTS]

Korean soprano Sumi Hwang, who gained international attention following her victory in the prestigious Queen Elisabeth Competition in Brussels in 2014, has come back to Korea to meet her local fans for the first time in two years. The 31-year-old soprano will be singing next to legendary pianist Helmut Deutsch. Deutsch is known for accompanying renowned singers including Jonas Kaufmann, who was his student.

In Korea, there are three veteran sopranos who have achieved international fame - Sumi Jo, Hong Hei-kyung and Shin Young-ok. They each have been performing for more than 20 years. There had been concerns that there was not much young talent to follow in the footsteps of the three divas, but those concerns quickly disappeared when Hwang appeared at the Queen Elisabeth Competition. Hwang caught the eyes and ears of a large international audience with her powerful voice.

Usually, when there’s a concert featuring two artists who are active internationally, they can only spare a day or two for rehearsals. But according to Hwang’s agency Arts & Artists, the singer and her accompaniment have met several times in Germany, where Hwang resides, as well as Vienna, where Deutsch lives, prior to coming to Seoul for the upcoming performance. Hwang is currently a soloist at Germany’s Theater Bonn.

“It was really me who bothered Deutsch, visiting Vienna whenever I had time to rehearse,” said Hwang. “Since we are going back to Korea for the first time in two years, I really wanted to show how much I’ve grown.”

Although Hwang calls Deutsch her teacher, the pianist says they are partners.

“After a recital in Bonn a few years back, Deutsch told me over a glass of wine that we are now partners and told me to call him by his first name,” said Hwang. “I was really honored by such an acknowledgement.”

The two artists’ relationship began in 2014 when Hwang won first prize at the Queen Elisabeth Competition where Deutsch was one of the judges. Right after the competition, Deutsch went over to Hwang and told her to call him “whenever you need a piano accompaniment.”

“Usually Asian singers tend to be a little unaccustomed to expressing their emotions but Hwang has great emotions and she knows how to express that through singing,” said Deutsch. “I see her developing every day and I don’t even ask her now during our rehearsals what she feels right now, as I can already feel it.”

The two have performed together in numerous halls in Europe since 2015 working closely as partners. Their two concerts in Korea - one in Seoul and another in Daegu - in 2015 made headlines for selling out so quickly. For the upcoming concert in Seoul, the two will show an array of songs from Brahms to Liszt and Strauss.