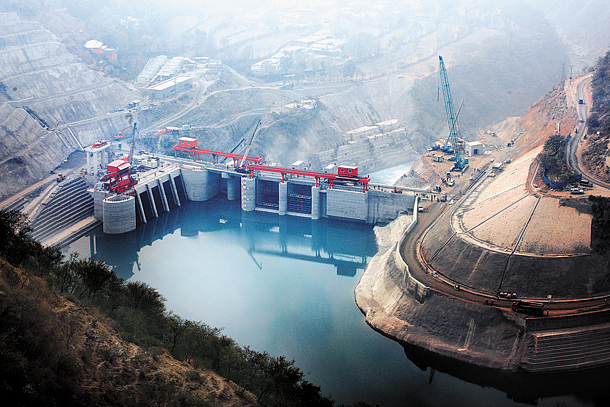 K-water is working on the construction of the Patrind Hydropower Plant Dam in Muzaffarabad, Pakistan. [K-WATER]

With an increasing global awareness about the severity of water issues, the importance of the management of water resources is being highlighted around the world. The World Economic Forum ‘Outlook on the Global Agenda 2015’ named the water crisis as the top global risk in terms of impact and six out of seventeen of the proposed Sustainable Development Goals of the UN endorsed by world leaders at the 70th anniversary of the UN in 2015 were related to water issues, demonstrating the increased awareness of the necessity of water resource management worldwide.

As of 2016, the global water market is worth 800 trillion won ($705.5 billion), and is expected to reach up to 1 quadrillion won by 2020. The integrated water management business, which integrates information and communication technology (ICT) into the water management process to maximize water resource efficiency, is expected to be in a high demand in the coming years. In addition, an increased demand for seawater desalination management systems is expected to come from Africa and the Middle East, one of the most water-starved regions in the world.

Since K-water began its first overseas project in 1994, the public enterprise has completed 68 projects in 24 countries as of this February and is currently involved in 13 projects in 11 countries.

Major enterprises in the water industry are seeking growth by diversifying their project portfolios through M&A and coming up with different strategies when securing projects in new regions. For example, Africa and Asia seen to have a high potential for growth, but at the same time, business in those areas can be highly risky. Therefore, the enterprises seeking entry into African and Asian markets tend to be highly selective.

National corporations in the water industry face many difficulties in the highly competitive in a global water market. For one, they tend to focus on securing domestic work before entering the overseas markets due to high entry barriers. In Korea, price competition is particularly high, so enterprises tend to lose momentum in their drive for innovation. In addition, although many have increased their R&D investment, they are still regarded as highly dependent on developed countries for fundamental equipment. The current situation in the nation clearly shows why powerful support from the state is essential. It is vital that institutions be established to encourage Korean water corporations to actively seek overseas growth and foster a competitive environment to drive momentum for technological innovation. Then, Korean corporations in the water industry will be able to gain a firm foothold in the global water market.

The overseas projects that K-water is carrying out are divided into three sections - ODA (official development assistance), technology exports, and investment projects. K-water’s global projects were initially carried out as official development assistance (ODA) but with the networks and technical skills K-water accumulated, it has broadened its overseas projects to investment projects. The first of K-water’s investment projects was the construction of the Patrind Hydropower Plant in Muzaffarabad, Pakistan, which was built to ease a severe shortage of electric power. This project is scheduled to be completed this year.

Including the undertaking in Pakistan and others in Equatorial Guinea, Chile, the Solomon Islands and Cambodia, K-water is currently working on a total of thirteen projects in eleven countries.

K-water has offered international education programs and launched a website to form a global network. Through educating overseas talent and its business partners overseas, K-water aims to teach other countries water resources management skills and share Korea’s advanced water management technology, ultimately enabling K-water to gain a foothold as Asia’s top educational institution specializing in water management. Over the past 20 years, the program has attracted 4,045 people from 97 countries. It collaborates with international organizations such as Korea International Cooperation Agency (KOICA) and UNESCO to offer diverse curriculums.

K-water makes use of the council it established in 2016, the Asia Water Council (AWC) to help Korean firms enter global markets. Through the council, which consists of its 120 members, including central governments and international organization such as UNESCO, the Asian Development Bank (ADB) and the World Bank, more concrete measures are taken to tackle Asia’s water related issues. The council has been praised for focusing on users in demand. For example, it has put together efforts to take a comprehensive research to analyze the potentiality of its smart water business in Denpasar, Indonesia. This year, K-water is planning Asia International Water Week (AIWW), a platform to share and co-create innovative water solutions, and another big event in Beijing, China to contribute to broadening its presence in global markets.