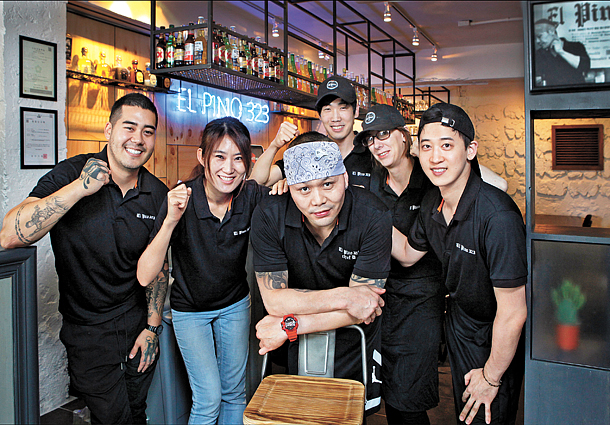 Kim Dong-hwa, also known as D Christian, was walking down the street in Itaewon, central Seoul, last month when two strangers approached him. Kim had just opened up a small Mexican restaurant in the neighborhood, not knowing whether the business would survive in the capital’s boisterous hub of international dining.

“You’re a celebrity,” said one woman. “You appeared in a couple of articles. In this area, you’re kind of like Vatos, but authentic.”

It was the third time someone stopped Kim on the street for a photo.

Four months have passed since the Korea JoongAng Daily featured Kim in a front-page article, which reached a record number of clicks on the paper’s website. Kim, a Korean adoptee who was deported from the United States in 2002 after being convicted of gang-related crimes, has a lot to brag about.

El Pino 323 is no longer a shabby establishment hidden among the underground stores near Aeogae Station in Mapo District, western Seoul. His restaurant has since moved near Noksapyeong Station on line No. 6, close to the east end of the Yongsan Garrison, and reopened in May with a chic, modern vibe.

Five investors who heard about the restaurant offered to join Kim’s business, among them the most successful Mexican chains in the country.

In the end, Kim chose to partner with close friends, who lacked a business background but were the most likely to leave him alone in the kitchen.

“We have a contract and whatever, but I’m the boss,” says Kim. “This is something I have to have full control over.”

El Pino 323 is now open most of the week from 6 p.m. to 9 p.m. Days off are announced in advance on their Facebook page. Kim, a perfectionist, is determined to start lunch service once he and his staff are flawlessly prepared.

“We’re testing new things, bringing additional menu items daily,” he says. “My kitchen has to get better in order to serve all the people coming here. They’re pretty good, but the prepping is too slow.”

Kim now has four chefs in his kitchen, a bartender and five servers. His wife, Kendra Jeong, is co-owner and manager of the restaurant.

A couple of months ago, the U.S. embassy called Kim asking whether he would be available for a chat. It was the first time he was contacted by the American government since his arrival here 15 years ago.

Two consular officials came to visit him at his restaurant when he was still in Mapo. The talk lasted less than 30 minutes.

“They said they read the article and wanted to learn about my situation, getting sent back,” says Kim. “They said it was unfortunate and that I seemed to have overcome things.”

The diplomats told Kim they had met other Korean deportees, but that he was “completely different.” Kim believes it was probably because he did not ask for help.

“I told them I was deported because I committed a crime, man. I didn’t fight it because, frankly, I didn’t want to go back to East L.A.,” he says.

Several magazines, a few cable shows and major broadcasters have also contacted him, but Kim rejected most of them, doubting whether they would help his business.

“You know how they do on TV,” he says, “like really emotional. I can’t do that. That’s just not…I mean, the last time I actually cried was maybe 10 years ago when I was super drunk.”

Kim says he is not ready to speak to the public about his past in the United States, when he was involved in drug dealing.

“I’m afraid of appearing in Korean-language media because I’m afraid what people are going to say,” he confesses. “What I dealt with [when it comes to] Koreans is that they don’t forgive easily, especially someone with a violent background. I’m not ready to say anything in Korean right now.”

Kim’s next goal? Getting successful in Itaewon and opening a second store serving Mexican sandwiches, or tortas. The name would be El Pino 323 Tortas.

“I want to be remembered as the best authentic Mexican place there is,” Kim says.