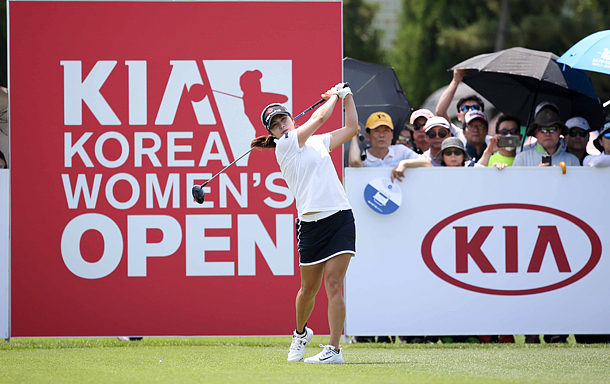 Kim Ji-hyun during the final round of the Kia Motors Korea Women’s Open Golf Championship at Bears Best Cheongna Country Club in Incheon on Sunday. Kim shot three under par to win her third tournament of the season and her career. [KLPGA]

There’s no stopping KLPGA golfer Kim Ji-hyun, who seems to be having the best season of her career.

Coming off a victory at the S-Oil Championship the previous weekend, the 25-year-old golfer scored another title on Sunday when she topped the Kia Motors Korea Women’s Open Golf Championship at Bears Best Cheongna Country Club in Incheon. It’s her third tournament trophy in two months.

Just like last week, Kim got off to a slow start this weekend, finishing the first day tied for 26th with two over par. But after the second day, with a score of 68 and four under par, she moved up the leaderboard, tying for fourth. Prior to the final round on Sunday, she started three shots behind the leader, Lee Jeong-eun, whom Kim faced down last week for the title.

Up till the fourth hole on the final day, Kim and Lee were tied for the lead. Shortly after, with a chip-in birdie on the par-three seventh, Kim was cruising solo at the top for the first time this weekend. But she led the field by just one shot, and it was on the par-four 13th that Kim got into some trouble, hitting her second shot into the hazard. She managed to finish the hole with a bogey by sticking her fourth shot, with a penalty, as close as one foot from the pin.

Last week, Kim had to play five additional holes to win the tournament, but this weekend, Kim’s victory was quite certain with back-to-back birdies on the 14th and 15th holes that extended her lead to three shots.

Kim then made a bogey on the par-four 16th hole, failing to make an up and down, but that didn’t prevent her from continuing a solo lead as she maintained her two-shot lead with pars on the last two holes.

“My goal in this tournament was to finish within the top five,” Kim said after the round. “I think I was able to win with an improvement in my putting, which allowed me to make more birdies and increased the chances of shooting under-par rounds.”

Kim continues a roundly successful year with the Kia Motors victory being her first major title. She might only be the second multi-tournament winner this season (Kim Hae-rym beat her to the punch), but she is the first player since Park Sung-hyun last year to win back-to-back events on the Korean tour. In April, Kim notched her first KLPGA Tour victory since her professional debut in 2009, at the KG Edaily Ladies Open with KFC, and last week, she captured her second career victory at the S-Oil Championship.

With a trophy from the Kia Motors Korea Women’s Open, Kim has earned her first invitation to play at an LPGA Tour event, the Kia Classic, next year and is now the KLPGA’s money leader for the season.

While things are looking up for Kim, Lee, who was defeated by Kim in a playoff round last weekend, found her chances of victory slipping again. She was the leader in the first three rounds, but her fortunes turned on the 13th hole of the final round when she made a quad on the par-four hole, considered one of the three hardest in the course. She shot into the hazard twice and lost her chance at winning, finishing sixth at one under par.

The KLPGA Tour continues with the BC Card - Hankyung Ladies Cup 2017 on Thursday.