Ryu nabs third win of the season with victory over Reds

Ryu nabs third win of the season with victory over Reds 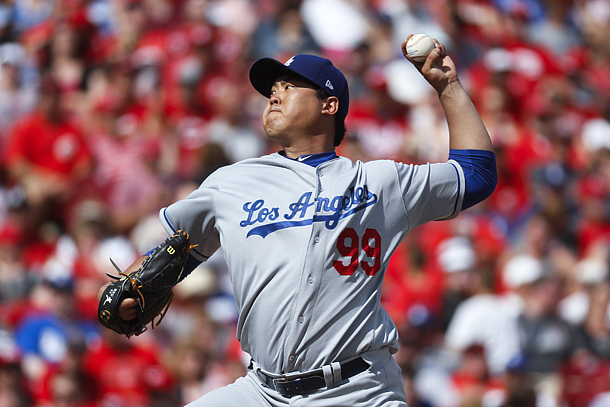 Ryu Hyun-jin of the Los Angeles Dodgers throws against the Cincinnati Reds at Great American Ball Park on Saturday. [AP/YONHAP]

Ryu Hyun-jin of the Los Angeles Dodgers beat the Cincinnati Reds in a return match for his third win of the year on Saturday at Great American Ball Park in Cincinnati.

Ryu improved to 3-6 after holding the Reds to two earned runs in five innings in the Dodgers’ 10-2 victory. He scattered eight hits while striking out seven and walking two. He lowered his ERA from 4.42 to 4.35.

Six days earlier, the Reds touched Ryu for three home runs in four innings in one of the left-hander’s worst outings this season. The Dodgers rallied to beat the Reds and let Ryu off the hook.

In the rematch, Ryu earned his first win since downing the Miami Marlins on May 18. Ryu was lifted for pinch-hitter Kike Hernandez in the sixth inning, with the Dodgers leading 8-2.

This was by far the largest offensive support Ryu has received from his teammates this season. He entered this game with the Dodgers having scored just 2.53 runs per nine innings in his appearances, the second-lowest total in the majors among pitchers with a minimum 50 innings pitched.

The Dodgers staked him to a 1-0 lead in the first on Cody Bellinger’s double, but Ryu gave back the lead right away in the bottom first. He allowed a leadoff single to Billy Hamilton, and Zack Cozart drove him home on a double to left. Left fielder Chris Taylor was charged with an error on a poor throw.

Ryu wiggled out of the jam against the heart of the Reds’ lineup. He struck out Joey Votto swinging, got Adam Duvall to fly out to center and then struck out Eugenio Suarez looking to keep it a tie game.

Ryu found more trouble in the second inning after a hit and a walk. With men at first and second, Reds pitcher Asher Wojciechowski flied out to right, and Billy Hamilton became Ryu’s third strikeout victim. The Dodgers broke out with five runs in the top third, thanks to back-to-back home runs by Bellinger and Joc Pederson.

The bases were still loaded with nobody out, and Ryu again pitched his way out of trouble. Scott Schebler lined out to shortstop, and Jose Peraza grounded into an inning-ending, 1-2-3 double play.

With two outs in the fourth, Hamilton hit a triple, but Ryu stranded him there by striking out Cozart.

The Reds kept putting pressure on Ryu but failed to cash in their base runners. Votto led off the fifth with a ground-rule double, but Ryu retired the next three batters in a row. He left eight men on base and needed a season high 105 pitches - 65 of them strikes - to get through his five innings.

“It was a difficult game,” Ryu told reporters afterward. “I tried to limit the damage and not give up too many hits in a row. I guess I did a good job in that regard.”

The 30-year-old, who missed the entire 2015 season after left shoulder surgery to repair a torn labrum and made just one start in 2016, has been struggling to get his fastball velocity up to par. Before his latest start, Ryu had been throwing his fastballs at an average speed of 89.8 mph, more than 3 mph below the major league norm.

The drop in his velocity was particularly galling in his previous start against the Reds, when his fastball topped out at 90 mph and the average velocity was 88 mph. Ryu had touched 94 mph in an earlier start against the Washington Nationals, and that appeared to have taken its toll on the pitcher who also had elbow surgery in 2016.

In this start, Ryu apparently conserved his energy for the last. Against Schebler in the fifth inning, Ryu dug deep and fired three fastballs and one cutter above 93 miles per hour.

Schebler grounded out to first after swinging on a 73 mile-an-hour curve, and he turned out to be Ryu’s last batter of the game. Ryu scored twice to help his own cause.

The Dodgers added a run apiece in the eighth and the ninth in the rout.