The best approach to SMEs

The best approach to SMEs 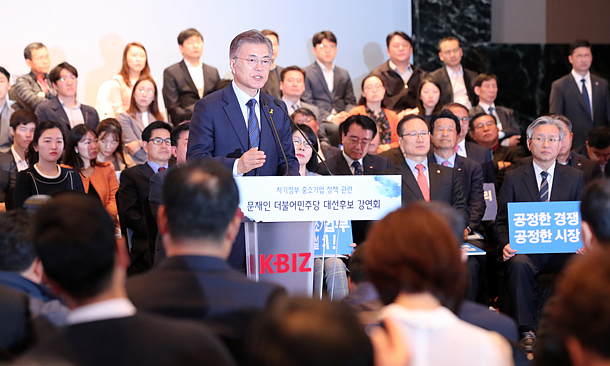 Moon Jae-in, then a presidential candidate for the Democratic Party, delivers a speech outlining his policy pledges for small and medium-sized businesses at the Korea Federation of SMEs in Yeouido, western Seoul, on April 10. [YONHAP]

About four years ago, I wrote a column arguing it would be better to let small and medium-sized companies go under. A few days earlier, then-President-elect Park Geun-hye’s transition team had received a briefing from the Small and Medium Business Administration. I wrote the controversial article because I was both anxious and hopeful about the new president vowing to be a patron for small industry. A generous and all-giving policy can often be ruinous. Many adventurous beginnings by small and midsize enterprises have been spoiled by overindulgence and protection from the state.

I cited some examples of bad corporate types from the 1999 book “Small and Midsize Firms Should Go Bust,” published amid a chain of bankruptcies following Korea’s foreign exchange crisis in 1997-98. They were companies that did not fear debt, whined and complained all the time, did little except breed ambition, had little to pitch in the international market, copied mainstream products, were profligates but grumbled about lack of money, and thought it foolish to do business with one’s own money.

The author had been a senior official at a public institution devoted to helping small and midsize companies and start-ups for nearly 20 years. The number of corporate “zombies” expanded partly because of former presidents’ dutiful partiality to small and midsize enterprises. Because of the administration’s extra attention to the sector, government offices competed to provide as generous assistance as possible instead of working under a long-term scheme.

The offices were happy to comply because they were able to enlarge their organizations and budgets. Agencies to help small and medium-sized businesses totaled 1,284 last year, including central and regional government agencies. About 4.2 percent of the annual budget, amounting to 467 billion won ($412 million), had been reserved for the sector. The list of supporting institutions includes the Korea Trade-Investment Promotion Agency, Korea International Trade Association, Small and Medium Business Corporation, Small and Medium Business Administration, Creative Economy Innovation Center, Techno Park, Korea Credit Guarantee Fund and Korea Technology Finance Corporation. Smaller institutions seek out companies that want to receive money in order to use up their budget.

Just as the government’s economic agenda of boosting hiring through increased government jobs could breed automatons that mechanically prepare for public job positions, excess funds to promote small and midsize companies can breed zombies waiting for handouts from the government. It is said among small enterprises that those who don’t use government funds are fools because they are so easy to obtain.

Some industry veterans say things were better under President Chun Doo Hwan. The authoritarian regime had organized a system to incubate and promote small businesses. His administration’s law on promoting small and medium-sized companies has been rated one of the best business promotion acts. In 1980, he had the country’s constitution include a phrase that the state has the duty to protect and promote small and midsize companies.

President Moon Jae-in also aspires to be remembered for his commitment to increasing hiring and promoting small businesses. He elevated the Small and Medium Business Administration from the vice-ministerial level to ministerial.

On campaign visit in April to the headquarters of the Korea Federation of SMEs, he wrote in the visitors’ book that he would make a paradise for small and midsize enterprises. What kind of paradise was he envisioning? The president and his aides should look closely at how small ventures and start-ups have prospered to become multinational technology entities in Japan and Germany without outright favoritism from their governments. They should study how Silicon Valley in the United States remains a hotbed for innovation without separate promotion from the federal government.

They also should read the book I mentioned earlier for secondary experience in the field.